The free outdoor event showcases performances from some of the biggest West End musicals, from Hamilton to Heathers.

West End Live is set to return this year with possibly it’s biggest line-up yet. Taking place on 18-19 September, the free, non-ticketed event is making a comeback following cancellation in 2020 because of Covid-19, and is bringing with it some of the biggest names in musical theatre.

The full line-up features several US musicals that have previously been unavailable due to licensing issues. Highlights include Hamilton, Phantom of the Opera, The Book of Mormon, Rock of Ages (UK tour) and The Lion King, although these are only a few of the big name musicals on offer.

The event will function on a first-come, first-served basis, with queues likely. The official capacity of Trafalgar Square is somewhere around 20 000 people, although in 2019 there were over 500 000 attendees over the course of the two days. With theatres only recently being given the go-ahead to reopen, this has the potential to be the biggest theatrical event in the UK for a long time.

Certain Covid guidelines will still be enforced, primarily the requirement for over-18s to provide evidence of their Covid-19 status. This can be done through the NHS app which will confirm vaccination or a lateral-flow test result.

Trafalgar Square will be fully equipped with toilet facilities, food vendors, photo ops, and merch stores – all the paraphernalia expected of an outdoor festival. With the exception of alcohol, festival-goers are permitted to bring their own food and drink.

For those unable to attend, highlights from the performances will be uploaded to London Theatre’s YouTube channel and updates will be available on their social media.

Highlights from previous West End Live events include the London debut of Everybody’s Talking About Jamie, Emma Hatton performing Wicked’s “If you care to find me, look to the Western sky” on top of a building to the West of the stage, and both Karen Mav and Marisha Wallace reprising the role of Dreamgirls’ Effie White — each performing an iconic number. With an impressive level of unexpectedness at each West End Live, fans of musicals have much to look forward to. 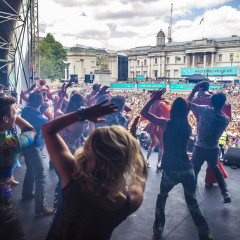 The free outdoor event showcases performances from some of the biggest West End musicals, from Hamilton to Heathers.