Spencer Elden, the infamous baby featured on the album was four months old when the photograph was taken, and claims the image is child pornography.

The baby from the cover of one of the most iconic albums of all time, Nirvana’s Nevermind, has filed a lawsuit against the band, saying that he was sexually exploited as a child. The lawsuit was filed in the Californian district court against the surviving members of the band, Kurt Cobain’s widow Courtney Love, and the record labels that have distributed the album over the last 30 years. Elden states that those in question produced child pornography with the image, which depicts an infant Elden swimming after a dollar bill, an image that exposes his genitalia.

Elden alleges that he has suffered “lifelong damages” from the album - which came out in 1991. The damages include: “extreme and permanent emotional distress with physical manifestations”, plus loss of education, wages, and “enjoyment of life”. Elden claims that he was never paid for the image, and that his parents had never signed a release form for the photo, shot specifically for this album cover. The lawsuit claims the image is “sexually graphic”, with Elden resembling “a sex worker - grabbing for a dollar bill”. It has been reported that he received $250 for the image. Elden is seeking $15,000 in damages from each defendant, plus costs, and asked that the trial come before a jury.

Elden has recreated the image twice, once for Rolling Stone, aged 10 and again for the New York Post in 2016. In the more recent shoot he stated: “Recently I’ve been thinking, ‘What if I wasn’t OK with my freaking penis being shown to everybody?’ I didn’t really have a choice.”

Photographer of the original image, Kirk Weddle told the Guardian in 2019: I’m still in contact with Spencer. I used to think, ‘Man, when that kid is 16 he’s gonna hate my guts!’ He doesn’t, but he’s conflicted about the picture. He feels that everybody made money off it and he didn’t. I think he deserves something. But it’s always the record labels that make the money.”

The premise of the photo was originally a concept from the late Kurt Cobain, who wanted a depiction of underwater childbirth, however the image would have been deemed too graphic, so the band decided on the swimming vision. Fans of Nirvana deem the image satirical, depicting the band as a baby, signing to a major label to chase money.

Header Image Credit: "Nevermind, by Nirvana" by Guille.17 is licensed under CC BY 2.0 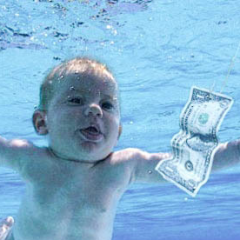 Spencer Elden, the infamous baby featured on the album was four months old when the photograph was taken, and claims the image is child pornography.