The celebrated drummer “passed away peacefully [...] surrounded by his family”.

Drummer for the Rolling Stones, Charlie Watts, has died aged 80 at a hospital in London. A statement from publicist Bernard Doherty to news agency PA Media reassures that “He passed away peacefully […] surrounded by his family” and stated, “Charlie was a cherished husband, father and grandfather and also, as a member of the Rolling Stones, one of the greatest drummers of his generation.”

2020 single Living in a Ghost Town was the last Stones track to feature Watts, who had been the group’s drummer since 1963. His final tour with the group was 2017’s No Filter tour, which lasted into 2018. His health concerns had already been made public when it was confirmed earlier this month that he would not be joining them for their upcoming US tour as he recovered from an unspecified medical issue.

Friends and musicians have paid tribute to Watts; fellow Stones Mick Jagger and Keith Richards both publishing uncaptioned photos to their social media accounts, Jagger, a photo of Watts smiling and Richards, an empty drum kit. Folk singer Joan Baez referred to Watts as “a prince among thieves… A gentleman through and through.”

While the rest of the group have been somewhat infamous for their rock ‘n’ roll antics, Watts was known as the stoic and more sensible foil to their debauched behaviour. Joan Jett has referred to him as “the most elegant and dignified drummer in rock’n’roll”. Despite this sensibility Watts was still a celebrated figure in rock history, dealing with his fellow bandmates with his trademark suave grace and often remembered for moments such as the time he put on a full suit and cologne just to punch Mick Jagger.

Watts was as steady in his personal life as he was in his profession, marrying Shirley Ann Shepherd in 1964 and staying with her until his death. He is survived by Shepherd, their daughter Seraphina, and granddaughter Charlotte. 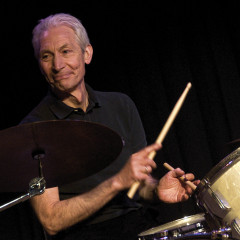 The celebrated drummer “passed away peacefully [...] surrounded by his family”.