Almost 200 firms have been ‘named and shamed’ by the government for failing to pay workers the minimum wage.

Companies such as Pret, The Body Shop and Enterprise Rent-A-Car have been named in a HMRC report for underpaying workers.

Nearly half of the breaches involved firms deducting pay from wages for things like uniforms and expenses. Others failed to pay for all the time staff worked or paid the incorrect apprenticeship rate.

The government acknowledged that many of the breaches were not intentional, but said the minimum wage laws were meant to ensure that a fair day's work received a fair day's pay.

"It is unacceptable for any company to come up short. All employers, including those on this list, need to pay workers properly," said business minister Paul Scully. "This government will continue to protect workers' rights vigilantly, and employers that short-change workers won't get off lightly," he added.

Trades Union Congress head of economics Kate Bell said these cases "are likely to be just the tip of an underpayment iceberg. Minimum wage workers have been at the heart of the pandemic, and deserve a decent wage of at least £10 an hour. But these figures show many workers aren't even being paid the legal minimum, with household name employers flouting their responsibility to properly pay staff.” She added that workers who suspect they have been underpaid should raise the issue with their union representative.

In April the government announced changes to the National Living Wage, which is now £8.91 for workers over the age of 23. 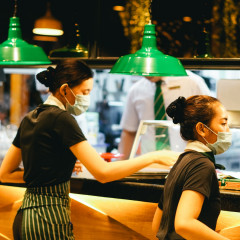 Almost 200 firms have been ‘named and shamed’ by the government for failing to pay workers the minimum wage.