Voice MagNewsP!nk offers to pay b…

Pop star P!nk has volunteered to pay the 1,500 euro fine issued to Norway’s women’s handball team for wearing shorts instead of bikini bottoms.

The European Handball Federation (EHF) issued the “improper clothing” fine to the Norway team after they wore shorts instead of bikini bottoms during a bronze medal match against Spain.

In response, US singer P!nk tweeted that she is “very proud of the Norwegian female beach handball team for protesting sexist rules about their uniform” and that she would be “happy to pay your fines for you. Keep it up”.

The team expressed their gratitude towards the Cover Me In Sunshine and Get the Party Started singer via their Instagram story. "Wow! Thank you so much for the support," they wrote.

The EHF’s decision has been met with widespread outrage, as Norway’s minister for culture and sport Abid Raja described it as “completely ridiculous”. In a tweet, former tennis champion Billie Jean King highlighted the hypocrisy of the men’s teams being allowed to wear shorts, and said “The sexualisation of women athletes must stop.”

EHF spokesperson Andrew Barringer said “The EHF is committed to bring this topic forward in the interest of its member federations” and a Norwegian motion to amend the current rules will be discussed in the coming months. 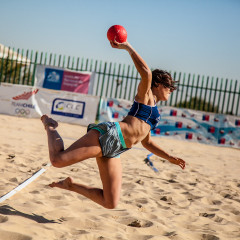 Pop star P!nk has volunteered to pay the 1,500 euro fine issued to Norway’s women’s handball team for wearing shorts instead of bikini bottoms.