The new Switch model will launch on 8 October 2021 and sees incremental improvements over its predecessor rather than an overhaul. New changes include a larger OLED screen, 64 GB of storage and an in-built LAN port for wired online gaming.

Nintendo has announced a new iteration of its Switch console, succinctly named the Nintendo Switch OLED model, with it being due to launch on 8 October 2021.

The main difference between the upcoming upgrade and its predecessor is the eponymous OLED screen which will allow for deeper and more vibrant colours when compared with the LCD screen of the original Switch.

The OLED model will also feature a larger screen (seven inches, up from 6.2), and an improvement to the kickstand which allows the console to be propped up against different surfaces. The kickstand will now run across the entire console and will be adjustable, allowing it to be set at multiple angles depending on user preference.

The internal storage of the upcoming OLED model will receive an upgrade, coming in at 64 GB which doubles the capacity of the original Switch. Despite the upgrade, it has been noted that users will most likely need an additional SD card in order to store more games on their device.

The dock mode – which allows players to integrate and play their device on a TV – will be changed, as the new OLED model will introduce an in-built LAN port to facilitate a wired network connection. The change will allow for a more stable connection when gaming online, which will also benefit the competitive gaming community.

Louise Shorthouse, senior games analyst at Ampere Analysis, noted that the incremental improvements of the OLED model pointed to it becoming ‘the flagship model’, while the ‘original will be phased out – perhaps through 2022’.

The Nintendo Switch OLED model is scheduled to be released on 8 October 2021 and will be priced at £309.99 on the My Nintendo Store. 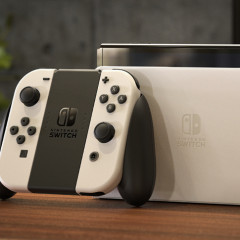 The new Switch model will launch on 8 October 2021 and sees incremental improvements over its predecessor rather than an overhaul. New changes include a larger OLED screen, 64 GB of storage and an in-built LAN port for wired online gaming.