Voice MagNewsLive streaming at a…

The UK is the second largest exporter of music in the world according to the latest BPI report.

1 in 10 tracks streamed globally are now by a British artist, according to a report by the British Phonographic Industry (BPI). That places the UK as the second largest exporter of music in the world, trumped only by the US. It also means that  streaming has pushed the value of the UK music industry's exports to more than half a billion pounds for the first time.

The news comes as no surprise as the pandemic emphasised alternate access to music. From streaming on leading platforms such as Spotify and Apple Music to live streaming performances from your favourite artists online, streaming over the internet became the only way to indulge in live music.

Andrew Foggin, Global Head of Music at DICE, comments: "The announcement on the value of British musical exports reaching an all-time high is great to see - especially given the now significant contribution made from independent talent from the U.K. - achieving the recognition that’s due.”

Dua Lipa, Stormzy, Little Mix and The 1975 are just a few of the top artists that have broken through in recent years and built up major international followings. Increased investment in record label A&R’s has resulted in some unbelievable talent with image and genre at its core, making the UK artist more desirable internationally. “The report has really underpinned the value of the musical talent on our shores and highlighted the importance that music has had on us during periods of lockdown,” exclaimed Foggin.

Another reason for this jump, says Foggin, is that “British artists have been able to connect with their fans over the past year, notably, through live streaming which has played a vital role in opening the door for both household names and lesser-known artists".

In fact, Dua Lipa's 'Studio 2054' livestream event drew a staggering 5 million-plus global views, a figure which is said to be the record for a paid live stream.

The BPI’s chief executive, Geoff Taylor, told The Guardian that “A new wave of British talent is capitalising on the immediacy of streaming to achieve fantastic success, measured in the hundreds of millions, even billions of streams.”

Undoubtedly, we have been reminded of the integral importance of music in this country with figures dramatically increasing from 2020, and that hunger for new talent is not going away. However, live streaming is only one way of experiencing music and for music lovers across the country, it will never replace the thrill of in-person gigs. 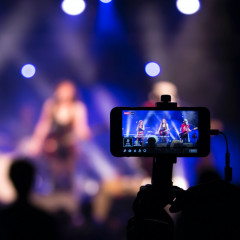 The UK is the second largest exporter of music in the world according to the latest BPI report.