The year-long celebration of Coventry’s City of Culture was kickstarted by an all-day event on 5 June.

The people of Coventry and the rest of the UK were united by an all-day showcase of streamed content to celebrate the 2021 City of Culture.

Coventry Moves united the people of Coventry to celebrate their city with a day of streamed events.

Coventry Moves was kickstarted by the performance of an original song titled ‘A Single Voice’. The song  acknowledged Coventry’s “hidden river”, the River Sherbourne, which runs under the city centre. This was followed by the short film ‘The River Run’, where five performers traced the path of the River Sherbourne via parkour, BMX biking and dance.

The theme of uncovering hidden gems such as the River Sherbourne was recognisable throughout Coventry Moves, in keeping with the aim of the UK City of Culture competition which is to boost local pride.

The remainder of the day’s short films focused on Coventry’s commitment to sustainability, the individual stories of the people that make up the city’s communities, and the legendary tale of Lady Godiva, an 11th century English noblewoman who rode naked through the streets of Coventry to protest high taxes. In the evening this tale was personified by a parade of 14 modern Lady Godivas chosen from more than 140 nominations, to represent the city's women.

The culmination of Coventry Moves was an invitation for the people of the city to coordinate with their neighbours and choose between 9 different radio stations that were all simultaneously playing a variation of an original piece of music. This “world-first” broadcast featured the voices of the city’s children and could also be heard through speakers placed around the city centre.

Coventry Moves has boldly kickstarted the city’s year as UK City of Culture. You can find more events here. 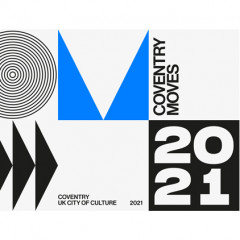 The year-long celebration of Coventry’s City of Culture was kickstarted by an all-day event on 5 June.