Atmosphere-heating carbon dioxide will be sucked from the air using trees, peat, rock chips, and charcoal in a new £30 million nationwide project.

A new experiment to extract carbon dioxide from the atmosphere is about to begin in the UK in an effort to mitigate climate change.

The aim of the trials, funded by UK Research and Innovation (UKRI), is to help the UK reach its legislated net-zero climate target by 2050. It will test how to do this effectively and affordably over 247 acres of land, making it one of the largest trials in the world.

Degraded peatlands will be re-wetted and replanted in the Pennines and west Wales, while rock chips that absorb CO2 as they break down in soil will be tested on farms in Devon, Hertfordshire and mid-Wales. Special charcoal called biochar will be buried at a sewage disposal site, on former mine sites and railway embankments. Planting trees to capture carbon across a large scale will also be tested.

“This is seriously exciting and pretty much world leading,” said Professor Cameron Hepburn, of the University of Oxford,  who is leading the coordination of the trials. “Nobody really wants to be in the situation of having to suck so much CO2 from the atmosphere. But that’s where we are – we’ve delayed [climate action] for too long.”

There is a current debate on whether carbon removal could be used by companies to offset their emissions, rather than cut them, and whether such offsets can be guaranteed to be genuine. This will come under the ethical and legal considerations of the UKRI’s trials.

The results of the trials will be used to shape longer-term government decision-making on the most effective technologies to help the UK tackle climate change and reduce CO2 emissions. The UK’s official climate advisers estimate the UK is likely to need to remove about 100m tonnes of CO2 a year by 2050 to reach net zero. 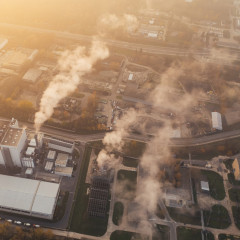 Trials to extract CO2 from atmosphere begin in UK

Atmosphere-heating carbon dioxide will be sucked from the air using trees, peat, rock chips, and charcoal in a new £30 million nationwide project.