After previously coming under fire for its anti-trade union and working practices, the e-commerce giant has announced that it will open up new warehouses and corporate roles.

Amazon has announced that it will hire 10,000 new employees as it opens further warehouses in the north and south of England. The company also plans to create numerous corporate roles in Cambridge, Edinburgh, London and Manchester.

New Amazon fulfilment centres are due to be opened in Dartford, Gateshead, Hinckley and Swindon as well as a parcel receive warehouse in Doncaster. Recruitment will also take place for office roles in areas such as fashion, digital marketing, AI and machine learning, among other departments.

The organisation plans to invest £10 million over three years into a scheme to train 5,000 employees in a variety of subjects such as accountancy, HGV driving and software development in order to provide them with transferable skills. Amazon will pay up to 95% of tuition and additional fees for adult education courses.

UK Business Secretary Kwasi Kwarteng has commended the news as a ‘prime investment in our retail sector’ that will ‘open up a wide range of opportunities for even more workers’.

John Boumphrey, Amazon’s UK Country Manager added: ‘We're proud of the front-line roles we offer across Amazon, and we also know that they will be a stepping stone for some in their career journey’. 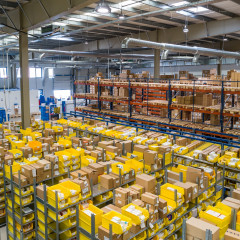 After previously coming under fire for its anti-trade union and working practices, the e-commerce giant has announced that it will open up new warehouses and corporate roles.