Voice MagNewsForestry the size of…

Environmental campaign group Trillion Trees have found that conservation efforts are working to regenerate forests around the world, with nearly 59 million hectares having regrown over the last 20 years.

Analysis from environmental campaign group Trillion Trees has found that since 2000, almost 59 million hectares of forest around the globe has regrown – an area the size of mainland France. The regeneration of this area of forestry could potentially absorb and store 5.9 gigatons of carbon dioxide, which is more than the annual emissions of the USA.

The study, which took place as part of a two year research project, aimed to aid global forest restoration efforts by visualising areas that would most benefit from reforesting. The analysis used satellite imaging data in tandem with on-ground surveys in numerous countries to gather its data.

Trillion Trees points to the Atlantic Forest in Brazil and the boreal forests of Mongolia as areas of particularly notable regrowth. In the Atlantic Forest, the analysis estimates that 4.2 million hectares have regrown since 2000, which roughly equates to the size of the Netherlands, with this being due to conservation efforts and changes in industry practices. Forests have similarly been regenerated in Mongolia, due in part to the work of conservationists as well as the Mongolian government, while areas of central Africa and Canada have also been described as ‘regeneration hotspots’.

John Lotspeich, Executive Director of Trillion Trees, remarked that the map of reforested areas ‘will be a valuable tool for conservationists, policymakers and funders to better understand the multiple ways we can work to increase forest cover, for the good of the planet’.

However, the issue of deforestation is still largely present as the study points out that between 2001 and 2019, ‘386 million hectares of tree cover were lost worldwide’. William Baldwin-Cantello, Director of Nature-based Solutions at the WWF (World Wildlife Fund), said: ‘The science is clear: if we are to avoid dangerous climate change and turn around the loss of nature, we must both halt deforestation and restore natural forests’. Baldwin-Cantello added that ‘the drivers of deforestation’ must be addressed, ‘which in the UK means strong domestic laws to prevent our food causing deforestation overseas’.

For more information about Trillion Trees and the work they do, click here. 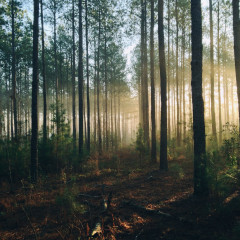 Forestry the size of France has regrown globally since 2000

Environmental campaign group Trillion Trees have found that conservation efforts are working to regenerate forests around the world, with nearly 59 million hectares having regrown over the last 20 years.