Over-65s and and households with low incomes or financial vulnerabilities were found to be the most likely to be without internet access. Additionally, 1 in 5 children did not always have access to online learning while schools were closed.

Approximately 1.5 million homes in the UK are without internet access according to a report conducted by the Office of Communications (Ofcom). Its annual report of online and media habits in the UK covered all three national lockdowns over the past year.

In total, 6% of households surveyed had no internet access at all when the study was conducted. Groups that were most likely to be without internet access were over-65s or households with low incomes or financial vulnerabilities.

The regulator found that 20% of children did not always have access to a device for online learning in the midst of school closures. Rocio Concha, director of policy and advocacy at campaign group Which?, said: ‘It is vital that more is done to address this digital divide and ensure all consumers are able to access broadband connectivity, particularly as new networks roll out across the UK’.

Former UK Prime Minister Gordon Brown has called on the government and Ofcom to formulate a national digital plan and told the BBC: ‘We have a generation that has lost out for more than a year on the education that they need, and will lose out when it comes to workforce qualifications, job prospects, and then income’. He added that ‘we've got to heal this digital divide. And I think the government's got to act pretty quickly’.

The report also found that tablets are the most popular device among 5 - 15 year olds, with 48% of 3 - 4 year old pre-schoolers having access to their own tablets. Around 60% of 5 - 15 year olds said they made their own videos online, and almost half said they watched content on TikTok.

Yih-Choung Teh, strategy and research group director at Ofcom, said the organisation has observed ‘a big rise in the use of TikTok during last year particularly among girls’. She added that ‘The perception among adults is that it's focused on younger people but adults have increasingly taken up TikTok as well’, and Ofcom’s report shows that 21% of its adult social media users have TikTok profiles. Despite this, Facebook is unsurprisingly the most popular social media platform overall, with 83% of adults in the study having a profile on the service.

To read Ofcom’s report on the media use and attitudes of children and parents, click here.

To read Ofcom’s report on the media use and attitudes of adults, click here. 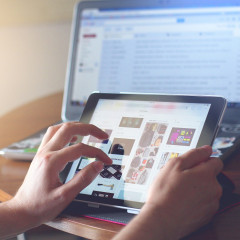 Over-65s and and households with low incomes or financial vulnerabilities were found to be the most likely to be without internet access. Additionally, 1 in 5 children did not always have access to online learning while schools were closed.