Slated for release in December 2021, anticipation is building for director Steven Spielberg’s remake of the famous musical West Side Story.

Set in 1950s New York, West Side Story follows two teenagers who fall in love despite being affiliated with rival gangs. Maria, who was originally played by actress Carol Lawrence on Broadway in 1957, will be played by Rachel Zegler in Spielberg’s reimagining. At only 19 years old, this is Zegler’s first ever film role. The role of Tony, first played by Larry Kert, will be performed by Ansel Elgort, who you might recognise from the popular YA romance film The Fault In Our Stars or from Edgar Wright’s action film Baby Driver.

West Side Story has had five Broadway revivals, three West End revivals and four US tours. It was adapted into a highly successful film in 1961, which won ten Academy Awards, including Best Picture. Deemed culturally significant by the US Library of Congress, the film was selected for the National Film Registry in 1997.

Spielberg told Vanity Fair that upon hearing the music for West Side Story as a kid, he “fell completely in love with it” and remaking the film “has been that one haunting temptation that I have finally given in to.” The acclaimed director is one of the most commercially successful directors in history, and is known for iconic films such as E.T., Jaws, Jurassic Park, and Indiana Jones: Raiders of the Lost Ark (to name only a few). 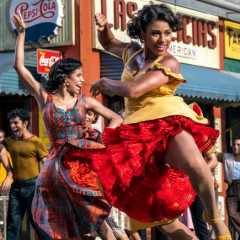 Trailer released for Spielberg's remake of West Side Story

Slated for release in December 2021, anticipation is building for director Steven Spielberg’s remake of the famous musical West Side Story.