The Duke of Edinburgh has ‘passed away peacefully’ at the age of 99, with the Royal Family announcing a period of mourning to commemorate his loss.

Prince Philip, Duke of Edinburgh, has died aged 99. His Royal Highness ‘passed away peacefully [...] at Windsor Castle’ according to a statement released by the Royal Family. Flags on landmark buildings in Britain will be lowered to half-mast as ‘The Royal Family joins with people around the world in mourning his loss’.

Prince Philip’s health had been in decline for several years, having undergone hip surgery in 2018, and he was admitted to King Edward VII’s Hospital in February 2021 after feeling unwell. He remained in hospital for a month, but after a successful procedure for a pre-existing heart condition at St. Bartholomew’s Hospital, the Duke of Edinburgh returned to Windsor Castle and was said to be in good spirits.

The Duke married Queen Elizabeth II in 1947, five years before her coronation in 1953, and was the longest-serving royal consort in British history. A patron of numerous charitable organisations, Prince Philip also served as chairman of The Duke of Edinburgh’s Award, a self-improvement programme for young people aged 14 - 24. He retired from his royal duties in August 2017, having completed over 22,000 engagements since 1952.

Prince Philip was born on the Greek island of Corfu in 1921 to Prince Andrew of Greece and Denmark and Princess Alice of Battenberg, a great-granddaughter of Queen Victoria. 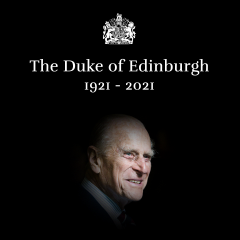 The Duke of Edinburgh has ‘passed away peacefully’ at the age of 99, with the Royal Family announcing a period of mourning to commemorate his loss.