Sesame Street welcomes Elijah and Wes to the show, a father and son who will teach about race and culture.

As children's TV goes, Sesame Street is a staple, with iconic characters such as Big Bird, Elmo, Cookie Monster and dynamic duo Bert and Ernie. The educational show, which started in 1969, has seen many changes since it started, but in recent years it has made a conscious effort to diversify its representation of culture, race and disability.

Now, the show is ready to unveil two new characters – father and son Elijah and Wes. The duo have been introduced to aid teaching in The ABCs of Racial Literacy, and confront racial injustice. This topic is needs to be seen on screen and Jeanette Betancourt, a senior vice president at Sesame Workshop confirmed this by saying:

“Children are not colorblind — not only do they first notice differences in race in infancy, but they also start forming their own sense of identity at a very young age.”

And although Wes and Elijah are not the first characters of colour on the show it will be the first time the black narrative will be explored in a way that will clearly encourage discussion about racism. They even have plans to expand the family, including Wes’s Mom appearing in a future segment.

Now, this is a big milestone for the show and subsequently backs their position on racial injustice highlighted by their hashtag #ComingTogether but it does raise the question: why now?

52 years is a long time for a show to be running, and as with the introduction of Julia (a character that has autism) in 2015 and Kami (an HIV Positive muppet) in 2006, it could be seen as a little too late to tackle such an issue.

However, it is clear that time, effort and care has been taken to create these characters, and regardless of the timing it is a great way to educate future generations about taboo subjects that even adults shy away from. 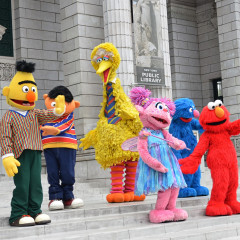 Sesame Street welcomes Elijah and Wes to the show, a father and son who will teach about race and culture.