Alfreton Male Voice Choir, ‘busk’ to raise funds for the annual Comic Relief ‘Red Nose Day’, defying age and technology to do their bit for the cause.

Pre-Covid, Alfreton Male Voice Choir were known for dressing up in very elaborate fancy dress to ‘busk’ around Alfreton, whilst raising money within the community. But in response to the pandemic, this year they’re thinking outside the box.

Choir Chairman and ‘Chief Busker’ Mick Mullarkey said,“Last year, Covid caught us, so this year, we were determined to do something to support Red Nose Day.”

It was from this desire the Choir hatched a plan to dress up and busk from their homes to produce a video, hoping to make people laugh and raise money by internet donation.

This new approach to fundraising has allowed thousands of people to do their bit for charity throughout the pandemic, and this choir was no exception. They decided to perform their version of ‘The Ballad of the Refuse Officer’ also known as, ‘My Old Man's A Dustman’ with Chief Busker Mullarkey taking the lead.

The collaborative efforts of the group meant that even though Covid-19 had put a halt on social gatherings, through technology they were able to record the project using Zoom as a stand-in studio.

Mick Mullarkey said, “The Choir now has several recordings on YouTube and social media that showcase our singing, music and technical achievements during the last year.”

However, the challenge of singing whilst wearing a red nose still remained, as he continued by saying:  “I can say that singing and recording whilst wearing red noses is a first for the Choir but we had good fun doing it which is what Red Nose Day fundraising is about.”

Comic Relief, will premier tonight at 7pm on BBC and will feature a celebrity performance by Justin Bieber to comedic sketches from Bond and Catherine Tate’s Nan. So, tune in and for more information visit https://www.comicrelief.com/rednoseday/ . 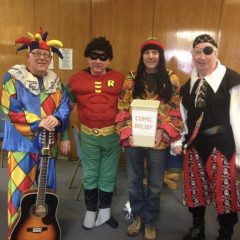 Alfreton Male Voice Choir, ‘busk’ to raise funds for the annual Comic Relief ‘Red Nose Day’, defying age and technology to do their bit for the cause.