3 out of 10 of the UK’s top firms will be responsible for a 2.7C rise in global warming if they do not lessen their current carbon footprints, according to a new report unveiled by Arabesque.

Analysis from climate data investment research firm Arabesque reveals that 31 members of the FTSE 100 (the index of the UKs largest companies) emit CO2 at a level that will be responsible for a 2.7C rise in global warming if they do not lessen their current carbon footprints.

The corporations singled out in this data are regular offenders in environmental disasters such as BP and Royal Dutch Shell, but also supermarket chain Morrisons and retail business Next. Arabesque looked at emissions directly under the companies’ operational control or from their use of electricity, energy and steam, and found them consistent with 2.7C heating or more. A line used often by such major corporations as BP is that they aim to reduce their carbon emissions to zero by a distant future date (2050 seems popular), but the details behind these schemes are commonly ill-defined.

A temperature rise of 2.7C would vastly deviate from the 2015 Paris agreement that aims to limit global warming to 1.5C. The environmental consequences of bypassing this would include the destruction of 40% of the Amazon rainforest, more frequent heat waves and acidification of rising oceans, among other catastrophes.

Conversations surrounding climate change often tend to land on the actions of the individual, with the narrative being that if everyone swaps their plastic straws for metal ones and takes shorter showers global warming will eventually be resolved. However, Arabesque’s data analysis highlights once again that any changes of individual behaviours are nothing in comparison to the environmental violations that major corporations are culpable of.

The chair of Arabesque Georg Kell is still optimistic, saying that “the politics is aligned” for pressures on companies to decarbonise and prioritise the planet over profit. Many of the companies named have recently committed to science-based targets based on United Nations guidelines that are considered gold-standard by environmentalists. The hope is that companies are genuinely committed to these green targets, and not just for any positive publicity. 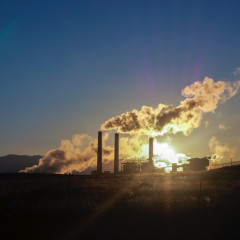