A new Creative Content Hub will be developed in Birmingham. Designed to help consolidate the film and TV industry in the city, the project is also intended to serve as a platform for other creative productions in the West Midlands.

Plans for a Creative Content Hub to support and consolidate Birmingham’s film and TV industry have been announced. A planning application has been submitted which would see five existing and derelict heritage buildings within the city be redeveloped for the use of independent TV production and other creative content.

The new Creative Content Hub will be designed with media innovation in mind, and will provide those within the creative industries in the city an opportunity to explore new platforms.

The facility, which will cost £18 million, will allow for the development of film, TV, video games and other virtual productions. The project has been aided by funding received from Greater Birmingham and Solihull Local Enterprise Partnership (GBSLEP).

Anita Bhalla, GBSLEP Board Director for Creative and Culture stated that the investment ‘reflects our commitment to the creative industries which we see as a priority sector that stimulates inclusive economic growth and a catalyst for job creation’.

Of the project itself, Ms Bhalla noted: ‘The Creative Content Hub will be an exciting addition to the media landscape and at the heart of innovative production in the region. It’s also an exciting step towards creating a TV, film and multimedia cluster in the heart of Birmingham’s Creative Quarter, in Digbeth’.

The Mayor of the West Midlands, Andy Street, is also optimistic about the Creative Hub, stating that ‘The West Midlands has some of the most creative talent in the world’ and that ‘this new hub will go a long way to [...] re-establishing the West Midlands as one of the country’s premier film and TV destinations’.

Birmingham has seen a resurgence in public interest over the last decade, due in part to the global success of BBC drama Peaky Blinders. The show, which chronicles the lives of the powerful Shelby family in 20th century Birmingham, has amassed a large following, resulting in a Legitimate Peaky Blinders Festival that was held within the city in September 2019.

With the development of the Creative Content Hub in Birmingham, there will be many future opportunities for other creative productions in the West Midlands to flourish. 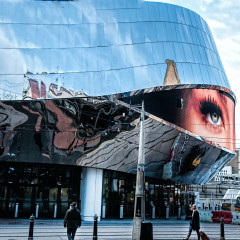 Birmingham to receive £18 million in funding for new Creative Hub

A new Creative Content Hub will be developed in Birmingham. Designed to help consolidate the film and TV industry in the city, the project is also intended to serve as a platform for other creative productions in the West Midlands.