The Soundhouse Organisation, well known for presenting world-class traditional folk music, is run by Douglas Robertson and Jane-Anne Purdy. They devised this event to act as a stage for a diverse and electric line-up of traditional, folk, jazz, pop, and Americana music.

Due to Covid-19, live music has become scarce, therefore making the ongoing support of public body Creative Scotland fundamental, as they ensure that artists such as Romanian singer-songwriter Lizabett Russo remain connected with artists and listeners alike.

The Soundhouse Organisation said: “It’s almost a year since we hosted our last concert in front of an audience at The Traverse. We could never have imagined that in February 2021, we would still be waiting to get back to doing what we love most - connecting musicians with music lovers in a sympathetic room.”

Musician Lizabett Russo said: “I am very excited to be opening Soundhouse’ Spotlight Series on 22nd February. I have missed live performances this past year, but it’s been interesting to explore different ways of collaborating and making music in new ways.”

The Soundhouse Spotlight Series runs at 20:00 on Mondays, from 22 February to 26 April. Each concert is being broadcast from Traverse 3, the theatre’s new online venue.

You can find out more info about the Soundhouse spotlight service at www.soundhouse.org.uk. 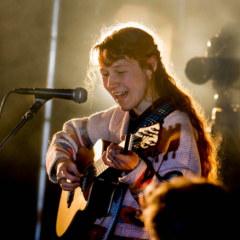