Lottie Mills, 19, has won the  2020 BBC Young Writers’ Award with First Story and Cambridge University for ‘The Changeling’, a story inspired by ‘otherhood’ and her frustration with ‘how difference, especially disability, is represented in fiction’.

A second-year student at Cambridge University, Lottie, who has Cerebral Palsy, was previously shortlisted for the Award in 2018. Praised by judge and YA Book Prize winner Will Hill as ‘heartbreakingly well-written’, her story reclaims the myth of the ‘changeling’ and transforms it from something used to persecute and exclude, into a magical, fantastical fable about a girl’s  extraordinary coming of age.

The news was announced this evening during a special short story edition of BBC Radio 4 Front Row. Due to the ongoing pandemic, Lottie received the news in her student halls at Cambridge, with parents Nick and Deborah travelling down to see her.

“My previous shortlist experience really fuelled my writing. Hearing so many amazing people – the judges, the representatives from the University and First Story, and of course, the BBC – praise my writing – had a huge impact on me, and for the first time a career as a writer seemed to be a realistic prospect. As a disabled person, my stories are quite often preoccupied with ideas of otherhood, based around characters who are outcast from their society in some way or another.

I really wanted to write a story which would show the strengths of disabled people or people who are ‘othered’ in some way, rather than portraying them as disadvantaged and in need of ‘fixing’ as so many stories do.”

Lottie beat stiff competition from Maleeha Faruki, 18, from Leicester for ‘Winds that Travel Across’; Mei Kawagoe, 15, from Leicestershire for ‘Three Pomegranate Seeds’; Ben Marshall, 18, from Otford, Kent for ‘Bingo Tuesdays’ and Naomi Thomas, 17, from Sheffield for ‘The Battle of Trafalgar Square’.

‘The Changeling’, and the other four shortlisted stories, are available to listen to via the Short Works podcast on the BBC Soundsapp and the BBC Radio 1 website. Lottie will be interviewed about her win on Radio 1’s Life Hacks on Sunday 11 October, and will be mentored by award-winning YA author and Judge Will Hill.

“We were blown away by ‘The Changeling’, it’s simply beautiful. I love the way it uses fairy mythology to tell a story about difference, disability, acceptance and coming of age. We had no idea that Lottie, who has been shortlisted for the Award before, was the writer when we chose the winner, but it shows what an incredible talent she is. I’m so happy she has won and is considering a career as an author after being inspired by the Young Writers’ Award.”

All five shortlisted writers attended a virtual workshop on Saturday 29th October designed to develop their writing skills and inspire them to consider different career paths within the arts. The session included personalised feedback for each writer from the YWA Judges, and covered how to take stories from page to broadcast with BBC Audio producers, a close reading of Virginia Woolf’s A Room of One’s Own led by Cambridge University’s Dr Lisa Mullen, and an interactive creative writing activity with YA author and Judge Muhammad Khan based on a Pixar short animation. Their work is also published in an anthology.

Now in its sixth year, The BBC Young Writers’ Award with First Story and Cambridge University  has quickly built a reputation for discovering the literary stars of the future with one of Lottie’s fellow 2018 award cohort, Reyah Martin, winning the 2020 Canada/Europe Commonwealth  Short Story Prize aged just 20. Open to all writers between the ages of 13–18 years at the time of entry, the Award is a cross-network collaboration between BBC Radio 4 and Radio 1.

We have also run an interview with Lottie, and you can read that here! 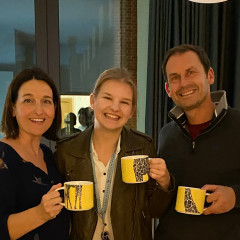