The five shortlisted authors are aged between 15-18

Giving voice to the ‘othered’ and reclaiming narratives are the dominating themes for the 2020 BBC Young Writers’ Award shortlist.

The five selected stories, written by young people aged 15-18, tackle a range of topics, from the relationship between a boy and his grandmother inspired by family experience of Alzheimer's, to the memory and stories of a first-generation Indian migrant.

Practising for GCSE English Language papers inspired two finalists to write, with one, Ben Marshall, never having written a short story before outside of the classroom. The shortlist also sees the return of 2018 finalist Lottie Mills – a second-year English Literature student at Cambridge University – for her ‘genuine triumph’ of a story inspired by her #OwnVoices experience of disability and her frustration at how difference is represented.

Starting Sunday 20 September the five shortlisted stories, along with interviews with the authors, will be available to listen via the Short Works podcast on the BBC Sounds app and the BBC Radio 1 website. Each under under 1000 words, the stories will be read by actors including Hollyoaks and Derry Girls actor Dylan Llewelyn, The End of the F***ing World actress Jessica Barden, and comedian and actress, Nimisha Odedra

The winner will be announced on Tuesday 6 October in a special short story edition of BBC Radio 4’s Front Row from 7.15pm.

Now in its sixth year, The BBC Young Writers’ Award with First Story and Cambridge University 2020 is open to all writers between the ages of 13 –18 years and was created to discover and inspire the next generation of writers. It is a cross-network collaboration between BBC Radio 4 and Radio 1.

“Congratulations to our five shortlisted writers and thank you to everyone who entered the 2020 BBC Young Writers’ Award. This year has been an unsettling one for young people and writing has proved a powerful way to explore complex feelings and emotions. Gaining insight into the minds of teenagers and what they care about through their writing has never seemed so vital. I hope this year’s entries will inspire others.”

Thistleton is joined on the judging panel by: Laura Bates, Sunday Times bestselling author and founder of ‘The Everyday Sexism Project’; screenwriter, novelist and YA Book Prize 2018 winner Will Hill; winner of the Branford Boase Award and shortlistee for the YA Book Prize 2019 Muhammad Khan; and poet, critic and journalist Bridget Minamore. 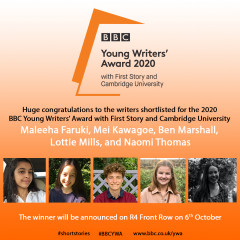 The five shortlisted authors are aged between 15-18