It won’t be available until at least June, and won’t support everyone

Self-employed people will be able to apply for a grant of up to 80% of their average monthly profits, under new Government plans.

After much criticised delay, Chancellor Rishi Sunak announced the plans and told the self-employed: "You have not been forgotten."

The aid will come in the form of a backdated lump sum, but won’t be paid until June at the earliest. The sum will be calculated from your monthly profits over the last three years of tax returns. It is open to those who earn under £50,000 a year – which will cover 3.8 million of the 5 million people registered as self-employed. Those people could receive up to £2,500 a month. That means someone at the top end could receive £7,500, although many will fall short of that figure.

The grant will be taxable, so will have to be declared as income when making a tax return, and is only available for those who filed a 2018-19 tax return. If you haven’t already done so, you have until 23 April 2020 to do so due to the announced four week extension to file.

You cannot apply for this scheme yet. HMRC will contact you if you are eligible for the scheme and invite you to apply online. HMRC also encourages you not to contact them at this time regarding the grant, as doing so ‘will only delay the urgent work being undertaken to introduce the scheme.’

If you are newly self-employed and didn’t file a tax return for 2018-19, then you will not be eligible for the grant, and will have to look to Universal Credit for support. Equally, if you are a Company owner who pays themselves through a dividend, you aren’t covered.

HMRC explain the eligibility criteria in more detail on their website. 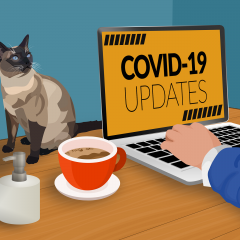 It won’t be available until at least June, and won’t support everyone