The list of nominees has been revealed for this year’s UK Theatre Awards, the only nationwide awards to honour and celebrate outstanding achievements in theatre throughout England, Scotland, Wales and Northern Ireland.

The nominations for the 2019 UK Theatre Awards have been announced, with Manchester’s Royal Exchange Theatre and Sheffield Theatre getting four nominations each.

This year’s nominations are split into new ‘On Stage’ and ‘Off Stage’ categories, as part of a refresh of the Awards to reflect the contemporary priorities of the UK’s theatre industry. As part of this, UK Theatre members now have more involvement in the nomination process, can put forward shows and individuals for nomination and can submit an application for an Off Stage award.

Changes have also been made to the award for the UK’s most welcoming theatre. In previous years this was decided by a public vote, but from 2019 the award will be decided by a panel of judges. The theatres nominated are the New Vic (Newcastle-under-Lyme), Storyhouse (Chester) and the Young Vic (London).

‘The UK’s performing arts scene has never been more multifaceted, and this year’s nominations reflect an unprecedented variety of creative voices, bringing to life a broad spectrum of stories on stages around the country. It is fantastic to see so much new and rising talent among the nominees, and we look forward to bringing the industry together in celebration at the UK Theatre Awards.

Full list of nominations for the UK Theatre Awards 2019

Best Performance in a Play

Best Performance in a Musical 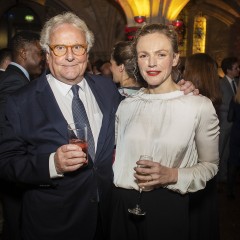 The list of nominees has been revealed for this year’s UK Theatre Awards, the only nationwide awards to honour and celebrate outstanding achievements in theatre throughout England, Scotland, Wales and Northern Ireland.