Millions of people across the world took to the streets on Friday demanding urgent action to tackle global warming.

What started as a solo effort by Swedish school girl Greta Thunberg in 2018, has exploded into one of the largest youth movements ever witnessed, as young people from Australia, the Americas, Africa and Asia participated in demonstrations asking for radical and immediate change across the world.

Protests took place in an estimated 185 countries, with young people trying to seize back their future from a world fast approaching its point of no return. Each region had their own specific concerns, from localised flooding, to air pollution and plastic use, but all were unified in the message that change needs to happen, and happen fast.

The protests took place on the eve of a UN climate summit, called to prompt more immediate action from governments to limit the rise in global temperatures to just 1.5. For the first time, young people called on adults to join them, and globally their call was answered, as trade unions, parents, teachers, and employees all took to the streets in solidarity.

Were you one of the young people who protested? We’d love to hear your story. 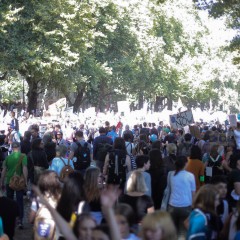 Millions march across the world for immediate climate action