The making of the modern musical?

The figures who normally grace our West End stages came out in their full regalia last night to instead grace the red carpet. At the Royal Albert Hall, thousands of theatrical legends and fans alike gathered in support of the event which is often dubbed the “biggest night in London theatre”. Most notably, the list of both nominees and winners strayed far from Shakespearean dramas and Hammerstein favourites. With ‘Company’, ‘Far From Away’ and ‘The Inheritance’ each grabbing a whole host of awards, did last night solidify the modern audience’s preference for new material over beloved classics?

Hosted by Jason Manford and with guest performances from the musicals ‘Six’ and ‘’Cats’, the award ceremony was attended by over 5000 guests. The evening included a touching tribute to recently deceased members of the theatrical community and was a worthy recognition of the hard work of onstage, backstage and creative teams who support the West End.

The winners of the 2019 Olivier Awards in full:

BEST ACTOR IN A SUPPORTING ROLE IN A MUSICAL

BEST ACTRESS IN A SUPPORTING ROLE IN A MUSICAL

Akram Khan for his performance in Xenos at Sadler’s Wells

A Monster Calls at The Old Vic

Kelly Devine for Come From Away at Phoenix Theatre

BEST ACTOR IN A MUSICAL

BEST ACTRESS IN A MUSICAL

Sharon D. Clarke for Caroline, Or Change at Playhouse Theatre

Flesh And Bone at Soho Theatre

Gareth Owen for Come From Away at Phoenix Theatre

Catherine Zuber for The King And I at The London Palladium

BEST ACTOR IN A SUPPORTING ROLE

Chris Walley for The Lieutenant Of Inishmore at Noël Coward Theatre

BEST ACTRESS IN A SUPPORTING ROLE

Monica Dolan for All About Eve at Noël Coward Theatre

The ensemble of Porgy And Bess at London Coliseum

The Inheritance at Young Vic and Noël Coward Theatre

Come From Away at Phoenix Theatre 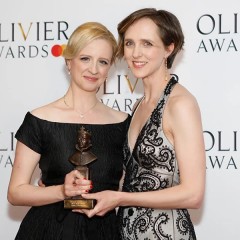 The making of the modern musical?