A money-centric week to kick off the new financial year

Pinch punch, it’s the start of a month, and April is always an important one because it marks the end of the financial year and the beginning of the next. For two million people in the UK, it will mean an increase to pay as a result of new national living wage brackets.

I’m only speaking personally here but it has been absolutely glorious to have the clocks go forward. I love lounging in bed as much as the next person, but the lighter evenings are marvellous, and I’ve been enjoying walking around the countryside I’m blessed with living in. It’s certainly distracted me from the nightmare omnishambles taking place in Parliament right now.

I’m not covering Brexit this week as things are in such a state of flux that it would be out of date before I published, so do keep an eye out for the latest update early next week.

Finally, our amazing Voice Contributors have their own Instagram account, and are doing some fantastic behind-the-scene shots of their daily lives in the creative sector. Do check them out on voice.extra.

National living wage to increase for 2 million in the UK 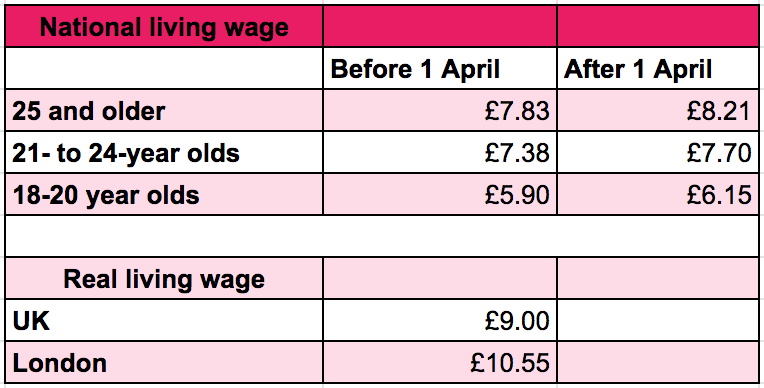 It’s important to note that the national living wage is separate from the real living wage, which is independently calculated by the Living Wage Foundation, which works out the minimum required to meet the basic costs of living in the UK. It is also worth highlighting that the wage gap between those 25 and older and those who are 18-to-20 has increased.

The chart above details the changes. 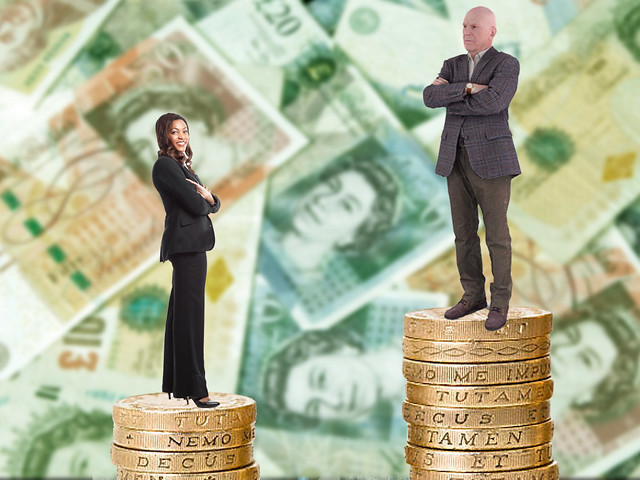 On the subject of pay gaps, a report this week has found that women who work in the public sector are paid on average 14% less than men. Since last year, organisations with more than 250 employees have been required to report pay gaps at the end of the financial year, and for the second year running, the public sector has failed to close the gap.

Women in the public sector are paid on average 86p for every pound paid to men. 88.5% of public sector organisations reported a median pay gap in favour of men, and over a third were paying over 20% more to men than women. 12 councils in the UK had a gap favouring women, with Three Rivers district council having a gap of -50%, so women were paid £1 for every 50p a man was paid. 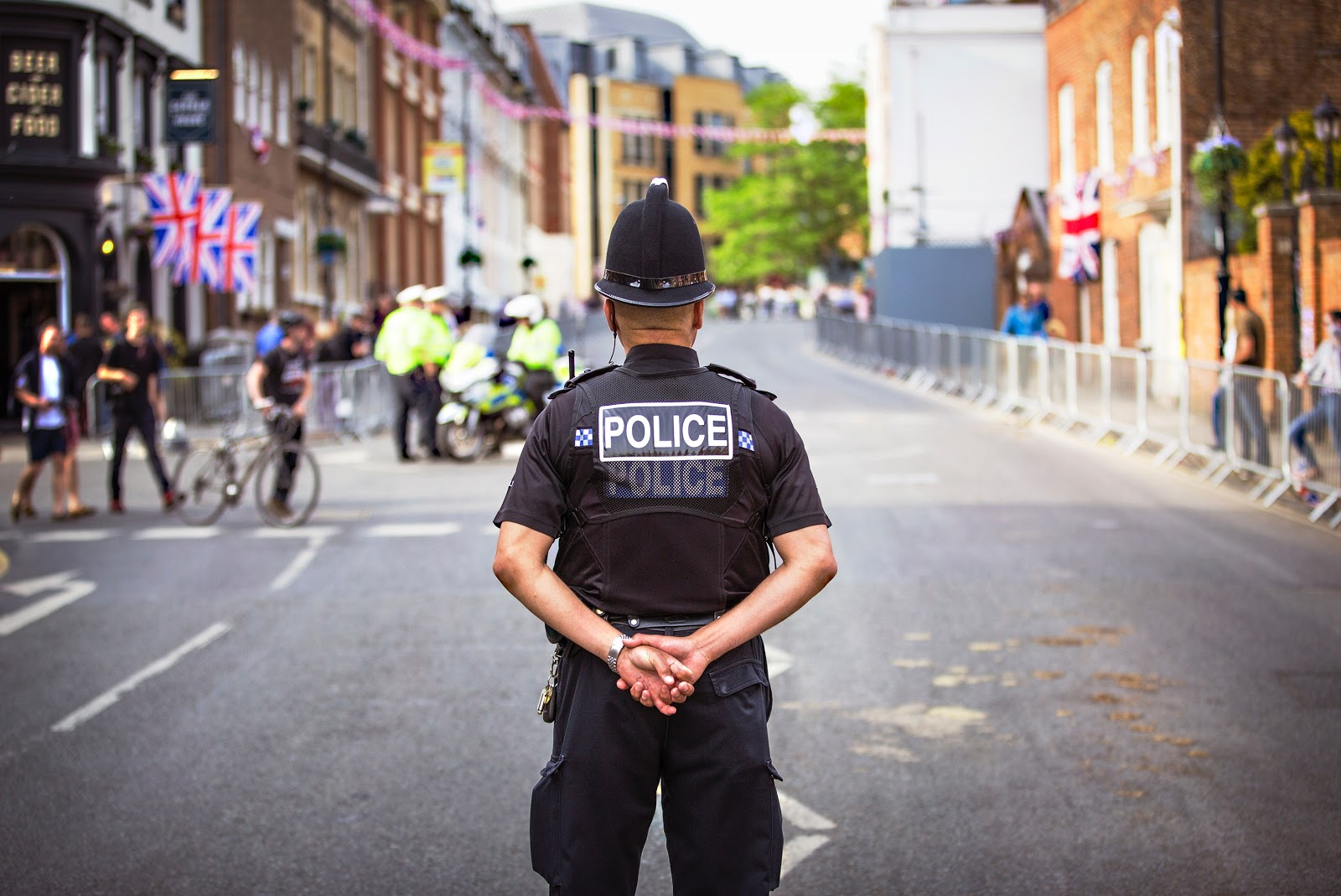 The government has extended stop and search powers that allow police to challenge people without reasonable suspicion in a response to rising knife crime. Under the old rules, Section 60 stop and searches granted police the power to search anyone in a designated area, but only if they have been authorised by a senior officer with intelligence that serious violence would occur. The changes by the Home Office mean that now lower-ranking inspectors can authorise Section 60 stop and searches, and now only have to believe that serious violence might occur.

However, the move has received criticism from the human rights group Liberty, who argue that in light of the statistics, Section 60 stop and searches are racially disproportionate. Black people are nine-and-a-half times more likely to be stopped and searched than white people in England and Wales.

Theresa May has yet to appoint a new Minister for Disabled People three weeks after the role became vacant. The previous minister - Sarah Newton - resigned her post to vote against a no deal Brexit. The vacancy was called ‘shameful’ by the Shadow Minister for Disabled People, Marsha De Cordova, who also wrote that “Disabled people have been forced to bear the brunt of devastating cuts to social security worth billions.” The news comes during a crisis for disability benefit assessments, where nearly three-quarters of appeals against the Department for Work and Pensions are successful.

It’s very likely that the role will remain unfilled for a while longer yet, as Conservative vice-chairman James Cleverly suggested that a minister wouldn’t be appointed until Brexit is resolved.

Children to be asked about social media during psychological assessments 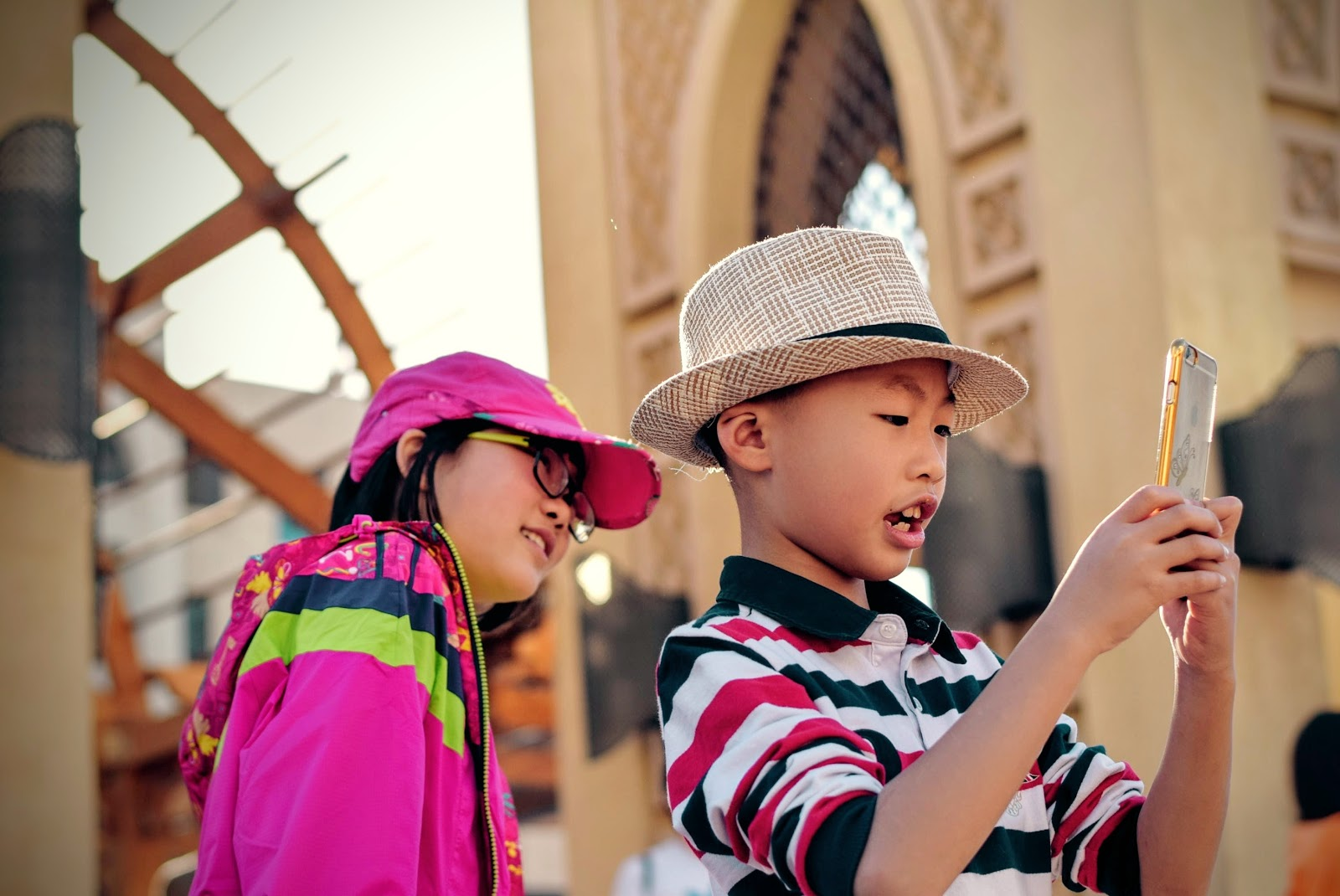 Psychiatrists are being encouraged to ask children with mental health issues how long they spend online and what their social media habits are. The Royal College of Psychiatrists believe it should be a routine part of assessments, citing concerns over how social media can impact mood, diet, sleep and behaviour. When assessing children, psychiatrists are now being advised to consider harmful content that might be viewed online, how technology can contribute to physiological issues, and how young people might retreat to the internet when suffering from depression.

The new guidance mirrors similar concern from government bodies, who have previously criticised social media giants for a failure to keep their platforms free. The UK government is expected to announce plans to introduce regulation on social media companies soon - something that Mark Zuckerberg at least is in favour of.

Half of babies born to renters 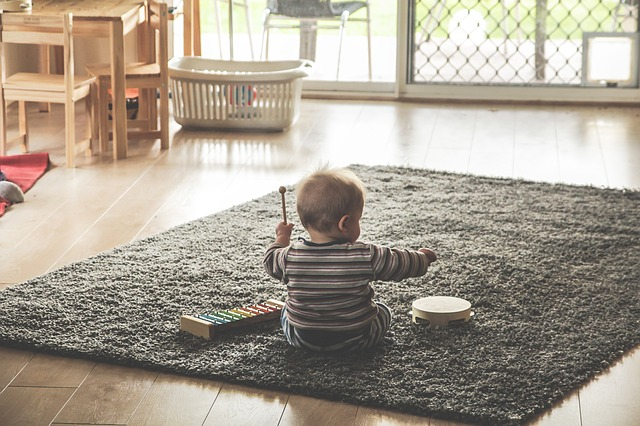 Families with children privately renting in the UK has risen by 94% in a decade, according to a new housing report. Insurance firm The Royal London has found that almost half of babies (49.2%) are born to families who rent. It’s the first time in almost six decades that this has been the case.

From the 1960s until 2003-04, only about a third of children were born in either private rentals, council homes or housing association accommodation. That has now reversed, with young people unable to buy homes until later in life, if at all. This trend means that children are being born with the threat of eviction constantly hanging over the family.

Organisers of the Edinburgh Science Festival have announced a blanket ban on sponsorship deals with fossil companies, claiming that the sector is “not moving fast enough” to meet climate change targets.

The announcement comes just days after the organisers met with activists from “Science Unstained”, who were opposed to the festival’s education projects being sponsored by ExxonMobil and Total.

The decision follows a growing trend in recent years of organisations being more discerning about where they accept money from. Our last Well, that happened… reported on the London Portrait Gallery turning down a £1m grant from the Sackler Trust, and we’ve also previously covered the work of BP or Not BP, who protest against oil companies involvement in the culture sector.

This year marks the 40th anniversary of the festival, and it runs from 6-21 April.

Apple announces its future in services

Last week Apple hosted an event which fleshed out the company’s pivot to a service company. In the star-studded announcement they launched Apple News Plus, Apple TV Plus, Apple Arcade and a new Apple Credit Card. All of these services are examples of  recurring revenue streams, which Apple will increasingly emphasise as their hardware sales flatten.

Apple News Plus is a $9.99 subscription that brings magazines and (rather thin) offering of news publications to the News app. It’s currently available in the US and has over 300 magazine partners, but notably absent is The Washington Post and the New York Times.

Apple Arcade is a game subscription service that will be available on iPhone, iPad, Apple TV and Macs, and allows you to download more than 100 games. Pricing wasn’t announced, and it’s unclear whether or not you can buy the games separately from the subscription. 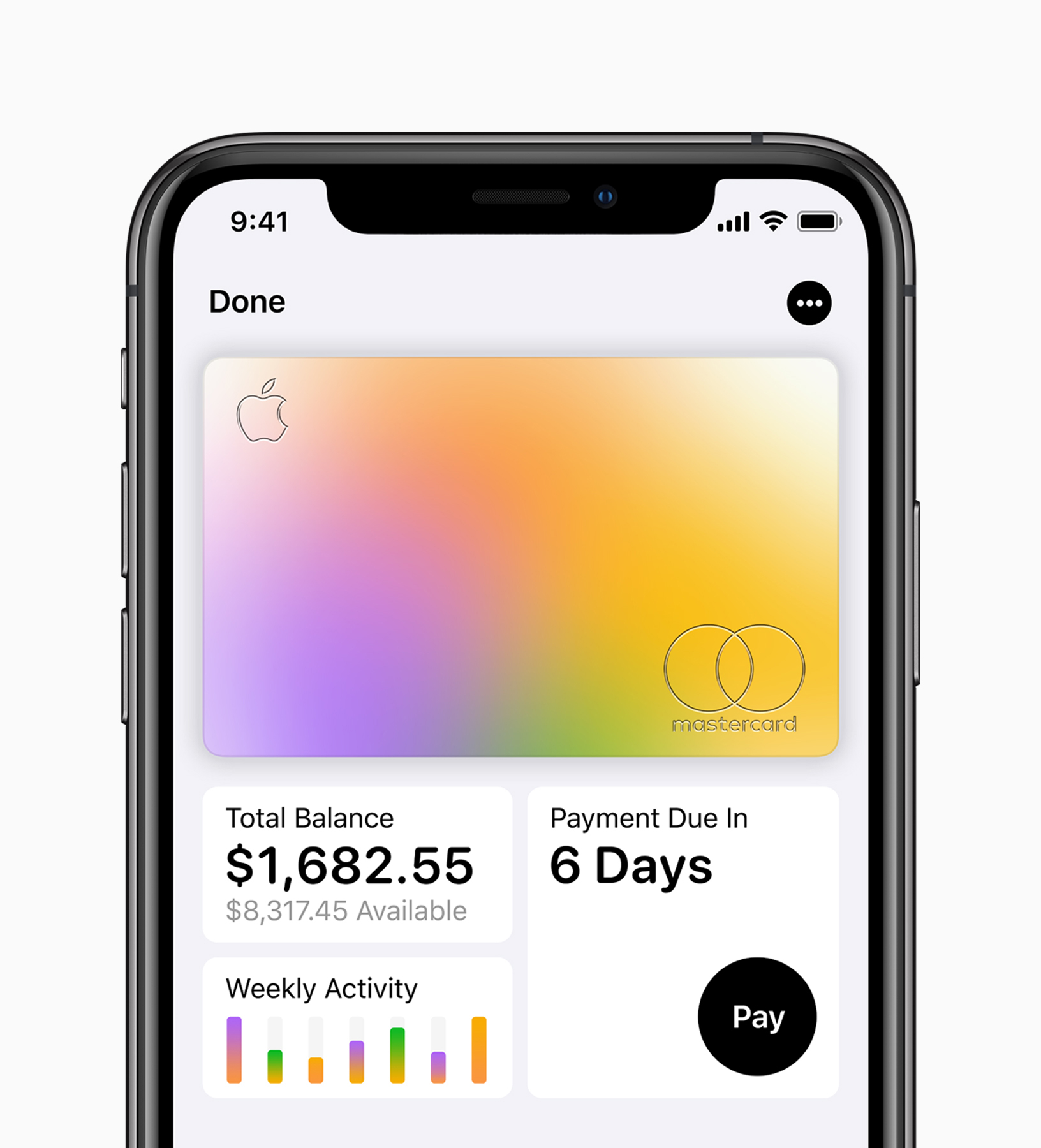 Image: Apple Apple Credit Card is a new credit card backed by Goldman Sachs and Mastercard, and offers 2% cashback on everyday purchases and 3% cashback on Apple products if you use Apple Pay. It will also come with a physical titanium card that features just your name and the Apple logo, but that only offers 1% cashback when used. The cashback is paid daily. You can apply for the card directly from Apple Pay, and the app will give a breakdown of how much interest you pay, display your statements and payment due dates. Apple says there are no late fees or increased interest rates for late payments.

Finally, Apple TV Plus is Apple’s subscription service for their own original programme. Like a lot of announcements at the event, details were very thin on the ground - price, trailers and launch date were notably missing - but they did bring out a lot of star power. The new service will include programming from Steven Spielberg, Jason Momoa, Oprah Winfrey, Sesame Street and Jennifer Aniston.

The Apple TV app also got refreshed, with a new Channels feature that will allow you to subscribe to programming from HBO, Showtime and Starz, to name a few. The app will be coming to Mac in autumn, and smart televisions, Amazon Fire TV and Roku starting in Spring. No pricing was announced. 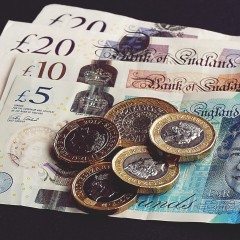 A money-centric week to kick off the new financial year