Another fortnight, another crazy two weeks in politics. I’m taking a break from writing a full section about Trump and Brexit, so here are the highlights. Trump has declared a national emergency in a long rambling speech which reiterated a lot of previously proven falsehoods about the migrant and drug crisis, while saying in the same speech that it wasn’t even necessary. Lawsuits have already been filed to stop him. Brexit continues to move absolutely nowhere, unlike businesses, who are continuing to pull out of the UK as a no deal Brexit looms.

While I’m here I’d just like to take the opportunity to highlight our new Speak Up campaign. We are inviting our readers to share their inspirational tales of change and activism, both inspiring others to do good deeds, as well as archiving the positive changes and kindness of our community.

This theme of change, of taking a stand for what you believe to be right, is echoed in the news stories featured this week, from the budding symbiosis between resigned Labour and Tory MPs, to the students striking for action on climate change, through to arts education at the Royal Academy being philanthropically funded.

Change is part of the human condition, but we all play a role in shaping its consequence. So, as the days get longer, I implore you to see those extra sunlight hours as an opportunity to stand up for what you believe in, and speak up for those who can’t.

MPs from Labour and Conservative Party resign the whip

UK politics is potentially reaching breaking point as seven MPs announced on Monday that they had left the Labour Party and would be sitting as independents. They also announced that they were forming a new centrist and pro-EU group called The Independent Group, that they hope will become an official party by the end of the year.

The seven MPs resigned stating dissatisfaction with the direction Labour was heading-in under Corbyn’s leadership, specifically revolving around how he is dealing with Brexit and the growing anti-semitism within the party. The decision of the ‘magnificent seven’ to resign was met with an array of reactions, from positive support, to relief that they’d finally gone, to anger that they had potentially cost Labour valuable seats in the next general election. Things became more challenging when, on the same day as their announcement, Angela Smith went on TV and said that people of colour had a ‘funny tinge’. Perhaps not the best move when you’ve just said you’d resigned from your party because it was increasingly racist.

Since this initial break on Monday, a further four MPs have joined, including three from the Conservative Party. Sarah Wollaston, Heidi Allen and Anna Soubry all resigned the Tory whip, stating that the handling of Brexit and the party’s hijacking by the European Research Group and the DUP as reasons for their departure.

Shamima Begum - the teenager who fled the UK to join the Islamic State in Syria - was found in a Syrian refugee camp by The Times journalist Anthony Loyd. She stated that she was pregnant and hoped to return to the UK. She did however state that she had no regrets over her decision to join ISIS. This news caused great debate within the UK over whether or not we should allow her to return.

The argument was (temporarily) put to bed when Home Secretary Sajid Javid announced that they were revoking her UK citizenship. This caused fresh controversy over whether or not it was in contradiction to UN declarations. Under the UN Declaration of Human Rights, everybody is entitled to a nationality, and “no-one shall be arbitrarily deprived of their nationality.” The legal basis for Javid’s decision is that Begum’s mother is Bangladeshi, and their ‘blood line’ law means that she will also have Bangladeshi citizenship providing she makes an effort to claim it by the time she turns 21 in two years. Critics say that the decision was rash, and that she should be brought back to the UK and tried in the UK courts.

Sajid Javid has however said that the decision to strip her mother of UK citizenship will have no impact on her son’s nationality, and her family is currently exploring options to bring him to the UK. They plan to fly to the Syrian refugee camp as soon as possible to get her consent to bring the child home, and begin legal proceedings to appeal the home office’s decision.

The final report of the Digital, Culture, Media and Sport select committee’s 18-month investigation into disinformation and fake news was released this week, and Facebook drew significant criticism for their involvement in election meddling, and deliberately obstructing the inquiry. The report accuses Zuckerberg of contempt of parliament for refusing on three separate occasions to give evidence. It criticises tech giants like Facebook for behaving like ‘digital gangsters’ and ‘considering themselves to be ahead of and beyond the law’.

The report also warned that current British electoral law is unfit for purpose and is susceptible to interference by foreign hostile actors. “Democracy is at risk from… disinformation and personalised ‘dark adverts’ from unidentifiable sources”. It calls on the Government to establish an independent investigation into “foreign influence, disinformation, funding, voter manipulation and the sharing of data” in the Scottish independence referendum, the EU referendum, and the 2017 general election.

Additionally, the report recommends a compulsory Code of Ethics for tech companies, that would be overseen by an independent regulator. It further stipulated that the regulator should be given powers to launch legal action against companies that breach the code, and it should be funded by a levy on tech companies operating in the UK.

You can read the whole report here.

Students across the UK cut classes last Friday as part of a global campaign calling for government action over the climate crisis. The protests come after a landmark report by the UN in October warned of the catastrophic effects if global temperatures continue to rise.

Organisers Youth Strike 4 Climate estimated that 15,000 people took part in the protests nationwide, with demonstrations occurring in more than 60 towns and cities in the UK. The action comes as part of a wider global movement, known as Schools 4 Climate Action.

The movement was inspired by Swedish student Greta Thunberg, who started skipping lessons every Friday last September to protest outside Swedish Parliament, accusing them of failing to honour the Paris Climate Agreement.

It was, however, pipped to the post for best film by Alfonso Cuaron’s semi-autobiographical film Roma, which won four awards in total. Its inclusion in the BAFTAs has proved controversial, given that it was made for Netflix and had a very limited cinema release. Vue’s chief executive said they would have to boycott the awards in the future if the Academy board didn’t reconsider its eligibility criteria. Roma also won best cinematography, best film not in the English language, and best director.

Controversy also swirled around Bohemian Rhapsody, which took home two awards: best actor (Rami Malek) and best sound. The film has been marred in controversy as a result of fresh allegations against director Bryan Singer, who was let go just weeks before the end of production.

It was a night of ups and downs (and a metric ton of glitter) but there was no dominant artist at 2019 Brit awards. It kicked off with an elaborate performance by Hugh Jackman that gave the strongest hint yet that there would be a sequel to the much loved The Greatest Showman. Calvin Harris finally won two Brits after he failed on his 14 previous nominations - winning one for British Producer, and another for British single alongside Dua Lipa for ‘One Kiss’.

The 1975 won British group and British album, and Little Mix won British video, and were seen jumping up and down in a group hug in celebration. Drake and Ariana Grande won international male and female artists respectively, and power couple Beyonce and Jay-Z showed support for Meghan Markle who is facing sustained press scrutiny while they collected their award for international group.

Pink was awarded an Outstanding contribution to music, a category in which she stands shoulder to shoulder with David Bowie, Sir Elton John and Sir Paul McCartney. 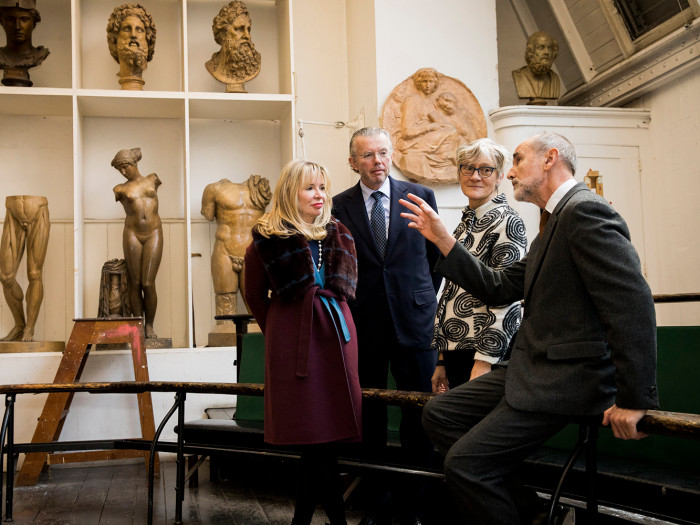 Britain's oldest art school received its largest ever donation from Hans Rausing. The Swedish businessman - and heir to the packaging firm Tetra Pak - donated £10m to the 250-year-old institution that provides a three-year art course free of charge to postgraduate students. 767 people applied for the 17 coveted positions available this year. The school has previously taught artists such as John Constable, WIlliam Blake and more recently Eddie Peake.

The Royal Academy of Arts has said that the gift will go towards restoring a historic London campus situated between the RA’s main buildings. The cost of renovation, which will include new plumbing, electrics and a better library: £15m. Work is expected to begin in 2021.

Fashion’s ‘man in black’ Karl Lagerfeld has died aged 85. The German designer was the creative director for Chanel and Fendi, and was one of the industry’s most revered figures. Lagerfeld oversaw Chanel for more than 30 years, and saw the Parisian label’s sales reach $10bn in 2017.

Stars have been posting messages of support for the fashion icon, but discussions have quickly moved onto his fortune, and whether or not his cat Choupette will be inheriting some of his £150m fortune. Under German law, if she had been named as his heir, she would be be entitled to the multi-million pound fortune. He previously said that he would marry the cat if the law allowed.

Voice is pleased to present the TrinityTalent class of 2018.

Following an open call for new talent, nominations for Musical Achievement, Creativity, Progress and Leadership poured in from friends, teachers, parents and carers. We teamed up with Trinity College London to find and showcase the amazing talent Trinity Music fosters.

We have been astounded by the musicianship, creativity and sheer graft of tomorrow’s best and brightest, from songwriters to producers, cellists and jazz clarinettists. TrinityTalent features a wide range of musicians, and you can read all of their inspiring stories over at TrinityTalent | Class 2018. 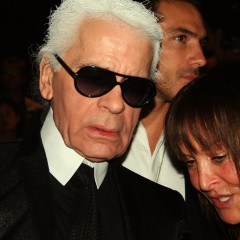