Mr Hill, aged 19, is currently a second year Choral and Instrumental Scholar at Oxford University, and can play over 10 instruments to above grade 8. He achieved his first Fellowship on the flute at just aged 16, and his second at 19.

Mr Hill suffers from severe Dysgraphia and Dyslexia, and had to drop out of his A-levels during his first year, and then complete the qualifications in a single year to be able to pursue his music aspirations.

Other recipients of this year’s TOPY Awards include Nobel Peace Prize winner Malala Yousafza, comedian Russell Howard, and Dr Emmett Kerr, a scientist who has made breakthrough technology in assistive robotics.

It was a real privilege to be able to share with the audience my musical journey and how organisations such as Gold Arts [Award] inspired me to achieve, and overcome obstacles.

It was good to answer questions relating to how my journey began and what I have had to overcome on the way, my goals, achievements and hopes for the future as well as how the cuts in the Arts funding has affected me and my family, and the argument that the Arts do need more funding, or funding reinstated, and more involvement for special needs young people.

Chris has previously written an article for Voice detailing how to get your music heard, which you can find here. 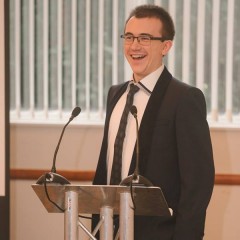