A lot to unpack…

It would be fair to say that Microsoft have been struggling this console generation. With a very mixed launch, the console maker has struggled to bring exclusives to the platform in the way Sony had. It looks like Microsoft are finally ready to change that.

Last year was good, with the announcement of the XBOX One X showing that Microsoft has the engineering chops to produce the world's most powerful console. This year, they needed to show off the software to run on it. And, for the most part they did, with 50 games displayed, 18 of which are either  console exclusives or launch exclusives.

The conference started with a teaser trailer for Halo Infinite, the latest in the much loved Halo series. Very little about the game was said, but 343 Industries took the opportunity to show off their new Slipspace engine. It will also bring the focus back to Master Chief.

Another staple in the Xbox first-party roster, Gears of War 5 - or as the announcers kept calling it, Gears 5 - will be scheduled to release on PC and Xbox One in 2019. The tone of the game seems dark and grim, and the big change is that the player appears to be filling the shoes of Kait Diaz rather than J.D. Fenix.

The announcement for Gears 5 was prefaced by the surprise reveal that there will be a mobile game called Gears Pop! - inspired by and made in partnership with Funko Pop. It will be available on iOS and Android in 2019.  There is also Gears Tactics, which is a turn-based strategy game set in the Gears universe. It will only be available on the PC, however.

Opening a new studio, and acquiring others

Many of Microsoft's problems stem from a lack of first party studios to support the XBOX. That no longer the case with Microsoft breaking out the cheque book in a major way.

Firstly, they are setting up a new studio called The Initiative, and it will be led by Darrell Gallagher - the former head of Crystal Dynamics.

They then announced that they had purchased a further four studios:  Undead Labs (State of Decay), Playground Games (Forza), Compulsion Games (We Happy Few), and Ninja Theory (DmC: Devil May Cry).

It’s unlikely that we will see anything from The Initiative before the end of this console generation, but it does set Microsoft up for the future.

Despite its awfully acted gameplay demo (nobody talks like that when playing a video game!) The Division 2 looks to be a promising advancement over the first game, and will be taking place in Washington DC. Although perhaps a little bit too blatant in its suggestion of corruption coming from within, there was also a rather post-apocalyptic vibe, and the promise of raids to make the end game continually challenging for the player. Massive Entertainment also said that they will be releasing multiple updates to the game over the years to add new content, and that the first few are already planned, and will be offered for free!

Not much of a surprise that there is a new Forza game, but boy does this one look beautiful! Set in the UK, the game will be available on Xbox and PC, and will show up on Game Pass on day of release, which happens to be 2 October.

Playground Games were keen to point out their dynamic weather and seasons, which are shared among all players so you can all experience a storm or a blizzard at the same time. They also noted that different sections of the world may become accessible or inaccessible depending on the season. The example given that when a lake is frozen over, you would be able to drive across it.

For those out of the loop, Kingdom Hearts is a crossover franchise game made in collaboration with Disney and Square Enix. It has been 13 years since Kingdom Hearts II came out, and after being first announced five years ago, Kingdom Hearts III has a release date: 29 January 2019.

While that may have longtime fans of the franchise excited, there is extra cause for celebration because for the first time ever, the franchise will be available on Xbox, allowing those invested in the Microsoft platform will finally be able to battle alongside Donald Duck, Mickey Mouse, Jack Sparrow and others!

The long anticipated game from CD Projekt Red, the development studio behind The Witcher franchise, finally received a trailer.

From those who played it at a closed door demo, the game has been described as part RPG, part GTA, where you get to traverse this beautiful looking city, where NPC’s have their own lives with a day/night cycle of behaviour, and will react to actions you make in the game. Furthermore, you are able to customise the look, skills, and even childhood backstory of your character to make the playstyle unique to you.

No release date was given, so those itching to get their hands on it will have a while to wait yet!

Those above a certain age may remember the absolute rage that came from playing Battletoads. Well, after 30 years, a new one is coming out in 2019. Beyond that, we know absolutely nothing, with no gameplay, artwork or even theme suggested at the conference. It is good to see Microsoft reaching in to use some of its older IP though. 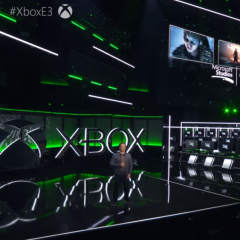 The biggest announcements from Microsoft E3 2018

A lot to unpack…