An art and textiles teacher from North London has won the competition to find the world’s best teacher.

Andria Zafirakou, who teaches at a secondary school in Brent, won the competition and claims a prize worth $1m (£720,000).

Mrs Zafirakou is the first UK winner of the Global Teacher Prize, seeing off competition from teachers nominated from more than 170 countries.

The prize was launched in 2015 by the Varkey Foundation, an education charity that wanted to shine a spotlight on the teaching profession. The award was given in a glitzy Oscars-style ceremony in Dubai.

During her acceptance speech, Mrs Zafirakou raised the importance of arts education, and called for more support in its delivery.

"Too often we neglect this power of the arts to actually transform lives, particularly in the poorest communities."

When she reached the top 10, Mrs Zafirakou spoke about the disadvantages facing many of her students.  "By getting pupils to open up about their home lives, I discovered that many of my students come from crowded homes where multiple families share a single property.”

“It's often so crowded and noisy I've had students tell me they have to do their homework in the bathroom, just to grab a few moments alone so they can concentrate."

Mrs Zafirakou teaches at Alperton Community College, an inner city area of London that is considered one of the most ethnically diverse and disadvantaged areas in the UK. There are 35 different languages spoken at the school.

Head teachers' leader Geoff Barton said the award "reminds us all of the power of great teachers, the importance of creative subjects, and demonstrates the world class standard of UK education".

Mrs Zafirakou will be staying on as a teacher for a good while yet though, as a condition of the prize money is remaining a teacher for at least five years. 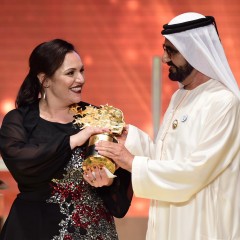