London will once again play host to Mozilla Festival as the world’s leading festival for an open internet returns for its tenth year.

The festival will once again take place at Ravensbourne College in London for 26 - 28 October.

The festival has expanded significantly since its humble origins and will this year consist of seven days of technology and policy led debates, events and sessions.  There will be over 2,000 participants from dozens of countries, and include many world-class keynote speakers.

During the week 22 - 26 October, Mozfest House will reside in the RSA, a central London venue that gives healthy internet proponents more time to discuss ideas and dive deeper into the workshops and events that interest them. MozFest House features films, workshops, conferences, and talks, all focusing on Internet health and showcasing the diversity of the Mozilla network. The venue also features a free co-working space.

Ticket registration will open in June, as will the callout for workshop proposals, but in the meantime why not whet your appetite by looking at some of Voice’s coverage of previous Mozfest events. 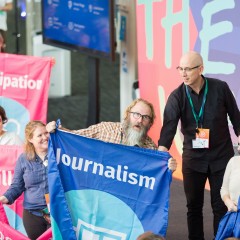