In an almost completely unsurprising list of winners, inclusion and representation took centre stage. Those and the jet ski.

This list is very pleasing, but very, very safe. The Shape of Water took most awards with four including Best Picture and Best Director. Any somewhat unexpected decision was far from an upset. I expected Mary J. Blige to get Best Supporting Actress for Mudbound and Guillermo del Toro and Vanessa Taylor to get Best Original Screenplay for The Shape of Water but these awards going to Allison Janney for I, Tonya and Jordan Peele for Get Out instead caused no eyelids to be batted. Especially in the case of Peele, which signifies the first time a Black person won the Best Original Screenplay award.

Instead, talking points came in the acceptance speeches. At the top, Frances McDormand, in her acceptance for Best Actress, encouraged every female nominee of the evening to stand up in order that everyone could see them and know that they have projects that they need financing. The ended with the word "inclusion rider" which is a clause in a contract that allows someone to only enter that contract if the studio can ensure a inclusive cast and crew wherein people are paid equally based on gender and ethnicity.

Poignantly, the Academy had Jimmy Kimmel and a number of award presenters including Ashley Judd address Harvey Weinstein and the #MeToo campaign.

Elsewhere, producers of Best Animated Film, Coco, spoke of creating a film where the marginalised had the opportunity to see themselves on screen. Similarly, one of the makers of Best Short Film, The Silent Child, a British film whose makers were once in Hollyoaks, delivered the speech in sign language. A heartwarming speech came from Guillermo del Toro as he was awarded Best Director, in which he mentions his fellow Mexican-born nominees and expresses gratitude to the industry for welcoming immigrants as it "erases lines in the sand...when the world tells us to make them deeper."

Then, Roger Deakins, who had been nominated 14 times throughout his career, finally picked up his first Oscar for Best Cinematography for the stunning Blade Runner 2049.

Host, Jimmy Kimmel, came up with a fairly funny running gag for the evening. While presenters habitually riff off how painfully long the ceremony is in various ways, Kimmel offered the deliverer of the shortest speech a humongous, green jet ski, showcased by Helen Mirren in shopping fashion style, no less. That went to the winner of Best Costume Design for Phantom Thread, Mark Bridges.

Call Me By Your Name
Darkest Hour
Dunkirk
Get Out
Lady Bird
Phantom Thread
The Post
WINNER: The Shape of Water
Three Billboards Outside Ebbing, Missouri

DeKalb Elementary
The Eleven O’Clock
My Nephew Emmett
WINNER: The Silent Child
Watu Wote/All of Us

WINNER: Blade Runner 2049
Guardians of the Galaxy Vol. 2
Kong: Skull Island
Star Wars: The Last Jedi
War for the Planet of the Apes

Edith and Eddie
WINNER: Heaven Is A Traffic Jam on the 405
Heroin(e)
Knife Skills
Traffic Stop

“Mighty River,” Mudbound
“Mystery of Love,” Call Me By Your Name
WINNER: “Remember Me,” Coco
“Stand Up For Something,” Marshall
“This Is Me,” The Greatest Showman 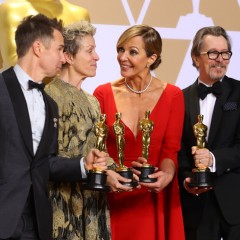 In an almost completely unsurprising list of winners, inclusion and representation took centre stage. Those and the jet ski.