The nominations are in for the worst films of the year

Award season is in full swing and while stars might have their fingers crossed for recognition from selection bodies, there will be one statue they won’t want to take home.

The Golden Raspberry awards, colloquially known as the Razzies, celebrates everything that is bad in the movie industry, and this year takes aim squarely at Transformers and The Mummy.

But it was Transformers: The Last Knight that provoked the most ire from the selection body with nine nominations. In fact, it has a nomination in every category bar one. Mark Wahlberg is nominated as worst actor in both Transformers and Daddy’s Home 2, alongside Anthony Hopkins for his supporting role in the Michael Bay franchise and Collide.

The list of nominations shows little variation, but one surprise is the inclusion of Mother!, where Jennifer Lawrence, Javier Bardem and Darren Aronofsky for worst actress, supporting actor and director respectively.

A video announcing the nominations can be found below, as well as the full list of nominations.

The Razzies will be held on 3 March, the day before the Oscars. 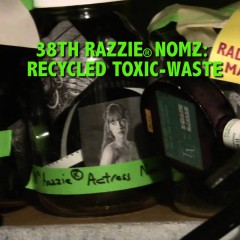 The nominations are in for the worst films of the year