Prince Harry has said that mental health investment needs to be at the heart of the armed forces training.

In a speech made at the Ministry of Defence, Prince Harry announced a new initiative that he said was about "placing mental fitness and mental health at the heart of the training and support provided to the entire defence community."

The initiative is a collaborative project between the MoD and the Royal Foundation, which was set up by Prince Harry and the Duke and Duchess of Cambridge to tackle mental health issues.

During his speech, Harry said that military personnel should be thought of as "high-performance athletes" and require continual investment.

"Crucially, fighting fitness is not just about physical fitness. It is just as much about mental fitness too," he said. "The military has faced the challenge of dealing with things like post-traumatic stress, anxiety and depression." He continued to state that there was a need to improve mental health investment to "help prevent some of these issues before they develop".

The defence secretary, Sir Michael Fallon, said: "By looking after our mental health we are building a more effective armed forces that helps keep this country safe. Our soldiers, sailors and airmen are the best in the world, but we will only maintain that if we are as serious about improving mental health as we are our combat skills and cutting-edge technology." 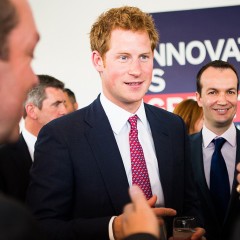