Voice MagNewsAriana Grande has be…

The unanimous council vote comes after the singer, during whose concert the 22 May attack happened in Manchester, raised over £3 million to help the affected.

On Wednesday morning, Manchester City Council reconvened for the first time since the attack, making it a significant day at the Chambers, anyway.

Less than two weeks after the attack, 23-year old Grande orchestrated the One Love Manchester concert bringing together the biggest concert artists in the world at Old Trafford cricket ground. Money raised from tickets sales and personal donations amassed the humongous sum for the We Love Manchester fund and Grande also visited several of the survivors in hospital.

Councillors gathered in Manchester Town Hall with a watching audience comprised of some of the families of the survivors and there were few dry eyes in the Chambers.

Fighting back tears, Council leader, Sir Richard Leese described to ITV Granada News how those who died on 22 May will never be forgotten by the city.

He went on to say, "I think we ought to look afresh at how we do honour those who make an exceptional contribution to the life of the city. I think it would be understandable if Ariana Grande said she never wanted to come to Manchester again. Instead, she said, 'I'm not gonna perform until I've been back to Manchester.' I think [that] brought comfort to thousands, raised millions…and this is a very simple way of us saying thank you." He also called her "a heroine of the city."

In addition to voting on Grande's patronage, the council took votes on holding civic receptions and new awards to honour those who responded to the attack.

Numerous faith leaders led prayers and read out the names of the 22 killed before holding a minute's silence.

The council meeting adjourned and the Hallé String Quartet played Oasis' Don't Look Back in Anger, a Mancunian anthem that has rallied the city since the attack. 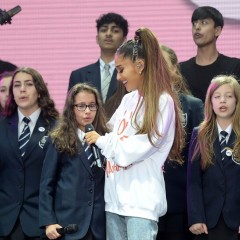 Ariana Grande has been made the first Honorary Citizen of Manchester

The unanimous council vote comes after the singer, during whose concert the 22 May attack happened in Manchester, raised over £3 million to help the affected.