Theresa May finds support for her minority government.

The Government have announced that a deal has been struck with the Democratic Unionist Party (DUP) to offer a confidence and supply deal.

After the shock election result which saw the Conservative majority eroded, Theresa May has been left searching for support to prop up her minority Government.

The DUP aren't tied to the Conservative party, and are free to vote against them in other policy matters.

However, it isn't a one-way deal, and the DUP are getting policy agreements and additional budget contributions for the next two years.

The York Street Interchange was also specifically mentioned, which is meant to ease congestion on three main roads to belfast meet. This is costed at roughly £150m. There is also £150m for ultra-fast broadband across the country, and £50m to "address immediate pressures".

With this deal in place the vote on the Queen's Speech scheduled for Thursday should pass without issue. This being said, Jeremy Corbyn has voiced his intention to add an amendment to the speech which would seek to scrap the 1% ceiling on public sector pay to be scrapped. 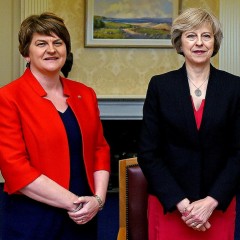 Theresa May finds support for her minority government.