This year, BAFTA celebrates quality over quantity and also celebrates a relegated giant.

By and large, this year's BAFTA TV awards rejected the television with enormous amounts of money behind it. Most notably, Netflix's £100 million, Golden Globe winning drama, The Crown, took precisely zero awards home despite being the night's most nominated drama, under consideration four times.

In addition, BAFTA mourned removal of BBC Three from terrestrial television by awarding the now online platform three of the higher profile of the biggest awards in British television: Best Actor (Adeel Akhtar for Murdered by My Father), Best Actress in a Comedy (Phoebe Waller-Bridge for global sleeper hit, Fleabag (bottom right)), and Best Scripted Comedy (People Just Do Nothing) the latter demonstrating a huge triumph for the cult hit sitcom. It even beat out the notorious quality of Channel 4, which took just the one, though for the coveted field of Best Mini-Series for National Treasure.

Back on the subject of The Crown, perhaps the biggest surprise of the night came in the award for Best Actress. It was expected to go to Claire Foy, who plays the Queen in a stellar and complex performance. Instead, the BAFTA cherub that is Sarah Lancashire (finally) took the award for her performance in Happy Valley (top left). Her performance in the BBC One hit that also took home Best Drama this year and Best Writer: Drama in 2015 has been the crowning glory of one of the highest rated dramas on British television and a thoroughly deserved win for one of the country's still most underrated actresses. In her acceptance speech, she thanked Claire Foy for "the best 10 hours I've ever spent under a duvet."

Joanna Lumley won the prestigious BAFTA Fellowship Award for her extensive career. She gave a moving speech in which she called the award "grand and unexpected."

Elsewhere, Adeel Akhtar's win was expected to go to Robbie Coltrane for National Treasure. This echoes the win for Best Actress by Georgina Campbell for Murdered By My Boyfriend. Tom Hollander took home the award for Best Supporting Actor for The Night Manager – a globally top rated programme for 2016 that received just this one nomination.

Damilola, Our Loved Boy (bottom left), the drama about the fatal stabbing of Pechkam ten-year old, Damilola Taylor finishes off the drama acting categories with Wunmi Mosaku taking Best Supporting Actress. They took the double by taking the Best Single Drama award as expected. Damilola's father called for peace among young people in the streets.

The final double winner of the night was, unsurprisingly, Planet Earth II (top right). The BBC documentary sequel won Best Specialist Factual and the award for Must-See Moment for that scene with the snakes and iguanas making BBC One the real winner of the night. The channel took home ten awards.

National Treasure (Channel 4) - WINNER
The Hollow Crown: The Wars of the Roses (BBC Two)
The Secret (ITV)
The Witness for the Prosecution (BBC One)

Who Do You Think You Are? (BBC One) - WINNER
The Doctor Who Gave Up Drugs (BBC Two)
The Great British Bake Off (BBC One)
Travel Man (Channel 4)

The Queen's 90th Birthday Celebration (ITV) - WINNER
The Centenary of the Battle of The Somme: Thiepval (BBC One)
Shakespeare Live!From the RSC (BBC Two)
Stand Up to Cancer (Channel 4) 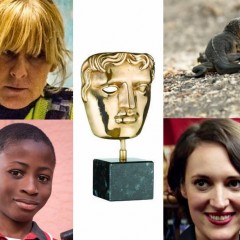 This year, BAFTA celebrates quality over quantity and also celebrates a relegated giant.