The surprises in this list comes as surprises after how they performed at the Golden Globes over the weekend. For example it is surprising that Arrival and Nocturnal Animals - both lead by Amy Adams - have each been nominated for nine awards despite winning one just between them at the Globes. Back to Moonlight, which has so far actually narrowly beaten La La Land in award wins and nominations including BAFTA's, has only gained four nominations against La La Land's massive 11, pushing it down to the film with only the ninth most nominations. It is nominated for Best Film, Best Original Screenplay, Best Supporting Actress for brit Naomie Harris and Supporting Actor for Mahershala Ali. It was ignored for Director, Cinematography, Editing, and Original Music.

Among all of this, BAFTA has been criticised for not nominating a single person from a BAME background in the lead acting and directing categories. In the supporting acting categories, though, we have Harris and Ali as well as Dev Patel and Viola Davis holding up nominations for BAME people with strong chances at winning. The Hollywood Reporter asked whether the snubbing of the likes of Moonlight director Barry Jenkins, Fences actor-director, Denzel Washington and the cast of Hidden Figures was comparable to #OscarsSoWhite. These films as well as Loving do exhibit an undeniably worrying pattern of ignoring BAME-focused films and their talents. Compared to the Oscars controversy, however, BAFTA had announced its plans to address ethnic diversity long before its nominations were released and without the catalyst that the Academy needed. That catalyst was, it is worth mentioning, two years worth of all-white nominees in leading and supporting acting categories and just Alejandro Gonzalez Iñàrritu nominated for (and winning) the Best Director award in that time. On the other hand, BAFTA didn't nominate Selma once in 2015 and the argument that relegating people of colour to supporting categories is unacceptable is unavoidable. BAFTA does have questions to answer for ignoring nominees and winners almost unanimously all over the awards circuit.

BAFTA have responded to the allegations citing the late release of Moonlight et al in the calendar meaning, somewhat fairly, that the films didn't have the time to affect the British academy. The BAFTA CEO, Amanda Berry said she does "not feel Barry [Jenkins] has been snubbed by Bafta," as the film he directed is nominated for four awards including Best Film. Another reason was that room was made for I, Daniel Blake, which obviously resonated greatly with the British academy.

I, Daniel Blake moves up the ranks to the the only British film nominated for Best Film. It is almost certain to pick up the Best British Film award and has a strong chance at Actor for Dave Johns, too from its five nominations. I'm happy to see it get this kind of recognition following being all-out ignored elsewhere. Elle, the French film that won the Golden Globes for Best Foreign Film and, as the biggest surprise of the night, Best Actress for Isabelle Huppert, isn't nominated once here in the UK. Similarly, American Honey, the film taken to new heights by its British director, Andrea Arnold who has been lauded for her work on the film, has only been nominated once despite being tipped for the Director and Supporting Actress awards. Also, only a single nomination for Loving despite powerful performances by Joel Edgerton and Ruth Negga.

Repeating the surprises set out by the Screen Actors Guild Awards, Emily Blunt's performance in The Girl On The Train and Jake Gyllenhaal in Nocturnal Animals have stolen Best Actress and Actor nominations that would've been expected for the likes of Ruth Negga for Loving (nominated for the Rising Star Award), Huppert, Annette Bening for 20th Century Women, Denzel Washington for Fences, Joel Edgerton for Loving, and at a stretch, Ryan Reynolds for Deadpool.

I wonder if Brexit will make as much of an impression on BAFTA's winners as Drumpf did on the Globes. Who should win come 12 February? My bets - if I've watched them and if they're even nominated that is - are in bold.

American Honey
Denial
Fantastic Beasts and Where to Find Them
I, Daniel Blake
Notes on Blindness
Under the Shadow

Best Debut by a British Writer, Director or Producer

Best Film not in the English Language

Arrival
Doctor Strange
Fantastic Beasts and Where to Find Them
The Jungle Book
Rogue One: A Star Wars Story 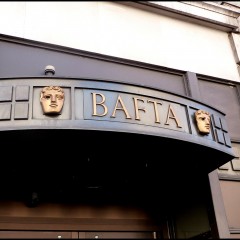