Remember, remember, the fifth of November...

How is it November already?! The same day you'll be reading this is the same day people up and down the country will be standing on fields, tightly packed together for warmth as they watch the visual delight that is Fireworks Night. Isn't it strange how it's changed from Bonfire Night, where the main spectacle was the huge bonfire with an effigy of Guido Fawkes on it, to fireworks, which although impressive, can't beat a big roaring fire. Or is that just me…? Remember, if you are having a bonfire, please do check for hedgehogs that might have taken refuge in among the wood!

There will be a lot of anger and vitriol spewed in the upcoming days and weeks regarding the democratic decision to allow Parliament to vote on triggering Article 50. Don't get swept up in it. Accusations that there are now 'enemies of the people', or betrayers of the country is exactly the kind of militarisation of rhetoric that we have to stand up to. We cannot allow the conversation to descend into division and fear mongering.

That being said, I've written a blog on this, and I welcome comments on it. I did very much enjoy being told how wrong, idiotic and liberal I was on my last piece!

Also, brace yourself, because it is now only 50 days until Christmas, although you'd be forgiven for thinking it's next week, given how the decorations are already out...

Have a good weekend, same time next week!

The High Court ruled this week that the Government has to allow Parliament to vote on the decision to trigger Article 50, and it has proven to be a controversial ruling. The case was brought to the High Court by businesswoman Gina Miller, who upon winning the ruling said "the case was about process, not politics," thereby asserting that it was the manner in which Brexit was being conducted that needed scrutiny, not the decision to leave. That also appears to be the thought process of Stephen Phillips, who resigned as MP yesterday due to the Government's reaction to the ruling, which is to take it to the Supreme Court in an effort to overthrow the decision. As you might have gathered from my continual ravings, Mozilla Festival, affectionately known as Mozfest, took place last weekend - and it was great. One of the largest open-source advocacy festivals in the world, which brought people together from all over the globe, held in the beautiful Ravensbourne College building, and Voice was there to cover the whole thing. We managed to get multiple interviews, reviews of sessions, and wrote about some of the key ideas that came from the three day event. All of this is now packed up in the Mozfest Voicebox, and I really encourage you to check it out! More will continue to drip through as the week continues.

Film4 are having a Black cinema Season

To tie in with the launch of the BFI's Black Star season, Film4 are highlighting and celebrating black filmmaking talent both in front of and behind the camera. Throughout November you will be able to watch films such as the Last King of Scotland, I, Robot, 12 years a Slave and more.

I deduct points from Film4 for uploading videos in Flash though, it's 2016! The BFI's Black Star is happening across October-December, and is a celebration of "the range, versatility and power of black actors on film and TV," with hundreds of Black Star events taking places across cinemas in the UK. For more information on the BFI's Black Star celebrations, follow this link.

Having already walked away with the Palme d'Or at Cannes, Ken Loache's moving film about a man trying to work through the bureaucracy that make up Britain's benefits system, is now up for seven awards at the British independent film awards. I, Daniel Blake is up for awards in best film, best director and best screenplay, which was written by longtime Loache collaborator Paul Laverty. Actors Dave Johns and Hayley Squires are both up for two awards a piece - best actor and actress respectively, and are competing for most promising newcomer. The winner will be announced on 4th December. Isis wrote a poignant piece on the film, which is definitely worthy of five minutes of your weekend.

Studies into a male contraceptive jab have proven to have a 96% effective rate in tests on roughly 270 partners. However, the trails were stopped early after 20 men dropped out due to the side effects, which included depression, acne and heightened libido - all symptoms females on the pill might experience, except the increase in sex drive, which for women actually reduces. The jab contained progestogen which affects the pituitary gland and blocks sperm productions, as well as testosterone which is meant to counterbalance the reduction in male hormones. Mario Festin from the WHO said "Although the injections were effective in reducing the rate of pregnancy, the combination of hormones needs to be studied more to consider a good balance between efficacy and safety." Although low grade, the condom is still the best form of sexual protection, and is the only for of contraception which - if used right - will also protect you from sexually transmitted diseases. Condoms can often be acquired for free from the NHS.

We've reached that point in the Bake Off break-up where all sides have started to show that they're moving on in life. While Paul is currently sat in a tent on his own, Mary Berry is coming out of the relationship with a new show on the BBC, where she will travel around the country visiting stately homes, sampling their culinary histories and then create recipes based on the experience. The show, titled Mary Berry's Secrets From Britain's Great Houses, will have six episodes, each lasting 30 minutes a piece.

The new 12-sided £1 coin is announced

The Royal Mint revealed the design of the new £1 coin, the distinguishing feature of which is its new 12-sided design. The new coin is lighter than the old one, and is claimed to be the most secure coin in the world. The reverse side design, featuring the English rose, Welsh leek, Scottish thistle and Northern Ireland shamrock was designed by then 15 year old David Pierce, who won the public design competition.It will begin circulation in March 2017, and will be in circulation alongside the existing £1 coin for a period of six months, before the current £1 is demonetised. The existing £1 coin has been in circulation for over 30 years, and is finally being replaced due to the level of counterfeiting that is happening - it is alleged that one in 30 coins in circulation are counterfeit.

The Kill Bill and Pulp Fiction director has stated that he intends to retire from directing, having been hinting that he will go after directing 10 films as early back as 2012. While talking at the Adobe Max conference in San Diego, he responded to a question regarding the definition of success as with "when I finish my career is that I'm considered one of the greatest film-makers that ever lived," he replied. "And going further, a great artist, not just film-maker". This again makes the case that Tarantino will go into writing novels and making theatre, something else he has previously alluded to. Given that he views Kill Bill Vol 1 and 2 as one film that was just cut up for cinematic release, and that his latest film, The Hateful Eight, was fittingly his eighth film, that will mean the Django Unchained director has two more to go until retirement. "Accord de Paris" - 'The Paris Agreement' is officially set to start in the year 2020, four years from now. It is an agreement within the UNFCCC (United Nations Framework Convention in Climate Change) and looks at reducing global warming to prevent on climate change. According to NBC, 96 countries have so far formally joined the accord. Those who have signed, including the US, China and the EU, have all agreed to keep the global temperature rise to 2.0 degrees above pre-industrial levels. This treaty is the culmination of decades of occasionally frustrating negotiations between states, but some, including ActionAid, have stated that the deal doesn't go far enough. Paris are celebrating the movement by lighting the Eiffel Tower green!

A spokesman for the prosecutor's office in Munich revealed this week that the German authorities are currently investigating Mark Zuckerberg and others in Facebook's senior management team for failing to remove racist posts. German law dictates that social media websites have to delete any posts that incite hatred or violence as soon as they're made aware of them, but a German lawyer has submitted a criminal complaint stating Facebook has failed to do so on multiple times.

Isis Sky contributed to this report 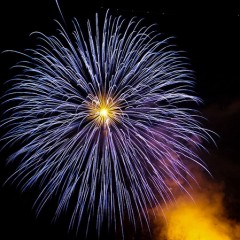 Remember, remember, the fifth of November...