Drake signs up to a new label, London Fashion Week ends, and we were spared a Mrs Doubtfire remake

This week has been a nightmare for people like me - indecisive column writers. So much to discuss, so few words. I'm eager to ensure that everybody gets the deserved helping of acerbity prescribed to them, but I lack sufficient word count to do it justice.

Do I talk about the BBC Jimmy Savile report, which produced a real 'no shit' moment when they said that the BBC had 'serious failings' in their allowing of decades of sexual abuse by Savile and Hall. No, the less said about them the better.

Perhaps I talk about Donald Trump, the original American Troll Doll, and a personal favourite topic of mine. There would be many a cheap joke made about his comment regarding Mexicans and the wall. "They will be thrilled to be paying for the wall," he proclaimed, followed by "I love the poorly educated" - referring, I believe, to his core voters. But the topic, much like the man, is played out, and needs to just fade away.

I'm always ready to criticise Jeremy Hunt. The Right Honourable Jeremy Hunt. The Health Secretary who has proven time and time again he knows as much about health as the cavemen who practiced early trepanning. Shame he cannot undergo the experience himself, a good lobotomy might make him more likable to the junior doctors - who are striking again - and less willing to manipulate all and any statement available to fit his narrative.

Perhaps I focus on the nearly 800,000 people who were removed from the electoral register when the Government made changes to the way people were counted. This is despite warnings from the independent Electoral Commission that the rushed plans would potentially see people disenfranchised. But no, I think we hear too often of this sideshow of elitist bullies utilising the system to further perverse democracy.

No, instead I think I'll dedicate my quickly dwindling column space to berate Boris Johnson. My MP, and the Mayor of London waddled out on Sunday and announced he would be campaigning for Britain to leave the EU. Although not before writing it in his £250k a year Telegraph column. Because if you're good at something, such as fabrication of statements and presenting them as fact, you might as well get paid, right?

And that is exactly what he has done here, it would seem. Spurious facts entrenched in a misty-eyed retelling of the Great British Empire, which was built on exploitation. A mock concern of the lack of representation Britain has in Europe, when swaths of our own society, such as BAMEs, lack true representation in our own Parliament. The suggestion we export and exude parliamentary democracy, when his own suggestions would go to undermine that.

Although Boris has an air of verisimilitude, it is all a facade. The 'public' Boris, in my opinion, is nothing more than a real life example of the Numskulls, or if you're a post millennial, Inside Out. Only, if you penetrate through the bumbling persona, through the silly hair, and continually gormless face, and the stuttering, and charm, lies a cold and calculating power hungry creature. But the referendum may be Boris' undoing.

By throwing his hat into the Brexit team, Boris may well have sealed his fate within the party. This political move, to him, may seem win-win. We leave and he is seen as the personality that pulled us out of the dictatorial European regime, David Cameron resigns and he swoops in to take leader of the Party. Alternatively, the country realises the catastrophic disaster leaving Europe would be for the nation economically and in terms of legislative power, and vote to stay in. David Cameron resigns so his leadership ends on a high note - as if he stayed in he'd surely say or do something to piss in the cornflakes - and Boris can be seen as the benevolent martyr, making a stand for what he believed was best for the country.

And there lies the rub. Let's break them down:

Look on, my friends. We have in our midst a true modern politician. Someone who convincingly woos the public, successfully compacting his elitism down, and squeezing into the mold of a man with morals. But I see you, Alexander. Your parlour tricks and sketch-show personality have worn thin, threadbare. You're walking on a fire pit and holding a can of petrol. And as much as many of us would like to, I don't think we'd unzip to put you out.

This week was none other than the annual BRIT Music Awards, full of Justin Bieber performances, Rihanna/Drake twerks, a pervy Dec, a fitting tribute to David Bowie and a drunk (and swearing) Adele who led the night with 4 BRITs, including Best British Single and Global Success. Other successes for the night include Coldplay winning Best British Group and Jack Garrett winning Critics Choice Award. A unique mix as always!

Mrs Doubtfire Remake is NOT happening

There have been rumours circling around this week that Jonah Hill had been signed up to star in a Mrs Doubtfire remake. You could almost hear Robin Williams rolling in his grave - may he rest in peace. Luckily, it turned out to be a hoax, there are no plans to remake Mrs D, Jonah Hill is not going to be starring in it, allowing the memory of a highly progressive film to remain intact.

It's finally happened. There have been many demands and calls for the blue social monolith to create a dislike button. Facebook listened, and then didn't give us one. Instead, we have reactions. Now, if you hover over the like button on the desktop, you will be presented with the options above. Now when somebody is having a bad day you can display your sadness, or if somebody posts a really stupid comment, you can post a sarcastic Wow. Facebook, I like this. 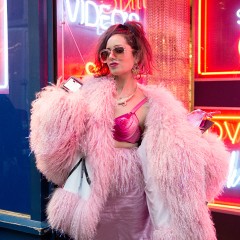 Drake signs up to a new label, London Fashion Week ends, and we were spared a Mrs Doubtfire remake