Health Secretary calls off negotiations with junior doctors, a new Harry Potter book is announced, and Frozen is going to Broadway

When I started planning this column at the beginning of the week, I was going to talk about how Health Secretary Jeremy Hunt appeared visibly uncomfortable on the Andrew Marr show as he was read out letters of concern from junior doctors.

I tell you this because I wanted to document the moment the Health Secretary tricked us into thinking he had an ounce of humanity or remorse. As today, Mr Hunt proves his name is indeed rhyming slang by telling the Commons he intends to force the contract on junior doctors regardless. A cheap shot by me? Perhaps, but we have swear filters on this website, and anything the filter doesn't pick up won't be severe enough to convey how disgusted and appalled I am by the handling of this whole fiasco.

Voice as an organisation is politically neutral. I, as a column writer and political graduate, am not. It's impossible to view this flustercuck as anything but politically motivated. I would like to believe that it's just Jeremy Hunt being inept, but nobody could be that brazenly bad at their job without being fired. This contract will only force junior doctors out of the NHS, which in turn will create a shortage, the Government can call it unsustainable, and continue to sell parts of it off like they already have done in Devon and other places.

Alternatively, we will continue to see doctors strike, perhaps this time without emergency care cover, and the smarmy, insidious, homeopathic subscribing boob of a Health Secretary can then continue his vaniloquence, pumping out soundbites until the public believe the BMA are the enemy. One thing I've observed is that the public is very reactionary, and short-sighted. This will play straight into the Government's hands, who can then use the public outrage to further weaken unions. Don't believe me? How many people do you see supporting Tube strikes?

But that is just my opinion, and everybody is entitled to disagree with me.

Speaking of ineptitude, Donald Trump has somehow won the Republican vote in the New Hampshire primaries, with 35% of the vote. This was after coming second in the Iowa Caucuses. This doesn't mean he is going to win the election yet, but he it undeniable that he is appealing to a subsection of America who are disenchanted with the Federal Government as it stands. However, that anger and desire for change is also being used by Bernie "feel the berne" Sanders, who received 60.4% of the votes, destroying Clinton, who had a 0.3 lead over him in Iowa.

On lighter news, I saw Deadpool this week, and thoroughly enjoyed myself. For those of you who didn't know, Deadpool is the result of a private company messing with medical experiments. So if you ever fancied being an anti-hero, then good news, by the time this Government is over you might get the chance!

Looks like the infamous Mighty Boosh duo may reunite for a long-awaited fourth series of the famous cult-hit comedy show! Since the last series ended back in 2007, fans have been nagging and battering comedians/writers Noel Fielding and Julian Barrett with questions regarding the future of the show; "Hopefully this year we're going to have a crack at something," Fielding continued. "No idea what, we're just going to see what happens. We might write a modern dance piece."

To Kill a Mockingbird is being adapted for stage

Playwright, producer and screenwriter Aaron Sorkin is to adapt Harper Lee's classic novel To Kill a Mockingbird for broadway. Sorkin won awards for his screenplay in 2010's A Social Network and has already been part of the Broadway plays A Few Good Men and The Farnsworth Invention. The book, which has been performed on stage previously, is loved by many and wasuntil recently part of the GCSE school curriculum. Scott Rudin the producer of the new performance announced that it will be shown during the 2017-18 season with direction from Bartlett Sher, a Tony award winner.

Disney's Frozen is hitting the stage

Other Broadway news includes the addition of Frozen to the stage and with their levels of popularity on screen it's hard to see how it could fail. Disney are also creating a television special to be aired on 'ABC during the 2017 holiday season'. Disney's chief operating officer Tom Staggs went on 'and in the tradition of Lion King and Aladdin, we have a new Frozen musical slated for Broadway in 2018.' The 2013 film was a massive success, with children and adults alike singing along to Let It Go.

Fun Fact: the film is based roughly on Hans Christian Andersen's The Snow Queen, and when you compound the names of key characters together 'Hans Kristoff Anna Sven' they sounds similar to the author's name!

Iain Morris and Damon Beesley the duo behind the Inbetweeners television series and films have signed a deal to work in partnership with Film4 and Entertainment Film Distributors. The two formed a company FP Films as part of their pre-existing television and film company, Fudge Park, last year. David Kosse, director of FIlm4 called the Inbetweeners 'one of the most successful UK comedy franchises of all time' and went on to say 'To pull off that level of success not once but twice is testament to the extraordinary creative genius and professional rigour of all involved' The deal states that Film4 will put up 50% of the money involved and Channel 4, the umbrella broadcasting company will retain UK television rights.

In the early noughties, popular Manchester-based dramedy series, Cold Feet starring James Nesbitt (who is pretty much in every series on British television right now) and Hermione Norris took the country by storm. No one really wanted it to go off air and it's clearly taken thirteen years for people to realise that. Peter Bullen's series is expected back on air towards the back end of the year.

For their new song, Upside Down & Inside Out, OK GO filmed its music video on a plane, in zero gravity and performed a massively cool aerobatic routine complete with fancy high tech props. As the video explains, there are no strings, or green screens. It's all them floating around in an incredible, intrinsic arrangement. The video is doing the rounds on the internet and is sure to go down as one of the biggest points of conversation about truly fascinating things this year! Have a watch and be thoroughly amazed. Unfortunately we cannot embed Facebook videos on our website, but we will update the article once it has been published on YouTube.

As I wrote above, Deadpool came out this week, and it is already the best superhero film I've seen in years. 20th Century Fox have definitely got out of the superhero rut they were stuck in, and have reinvigorated the Marvel hero genre as a whole. The movie is rated 15, which in itself is a 'big risk' for the studio, before you have a character which is breaking the fourth wall and making snide jabs at said studio for taking so damn long to make it. If you are stuck for something to do this weekend, or in general, go and see Deadpool, it is the new standard by which I will evaluate comic book films.

New Harry Potter book to be released this year

Harry Potter and the Cursed Child Parts I & II will be released this summer, it has been announced on Pottermore. The book will be the script of the upcoming play and will be the eighth book in the series, following the story of Harry's son Albus Severus Potter. The book will be released on 31st July, the day after the debut of the play and also Harry Potter's birthday.

An estimated 75 jobs are to be lost when the Independent and IoS stop printing in late March. The 30 year old paper is moving to a digital focus, as the cost of printing is no longer considered economically viable. Indy owner Evgeny Lebedev said "The newspaper industry is changing, and that change is being driven by readers." "They're showing us that the future is digital. This decision preserves the Independent brand and allows us to continue to invest in the high quality editorial content that is attracting more and more readers to our online platforms." 25 digital content jobs are expected to be created by the change. This week also saw the sale of the Independents cut price paper i, to Johnston Press.

***
Bhavesh, Sally, Ellen and Luke contributed to this report. 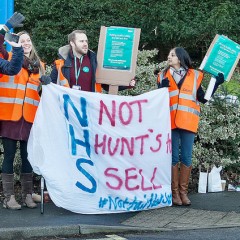 Health Secretary calls off negotiations with junior doctors, a new Harry Potter book is announced, and Frozen is going to Broadway