Voice MagNewsHarry Potter and the…

The eight book in the Harry Potter series will be released this summer, it has been announced on Pottermore, J.K Rowling's official site for the series.

The e-book will be published simultaneously and these versions will be the Special Rehearsal Edition, with the Definitive Collector's Edition following later. This book will be the official sequel, counting as the eighth book in the series, but also adding to a growing collection of books related to Potter's wizarding world, including Tales of Beedle the Bard and Quidditch Through the Ages.

The play follows on from the scene set in the epilogue of the final book where Harry, Ron and Hermione wave their children off as they depart for Hogwarts for the first time. Harry is now a father and Ministry of Magic employee and the story will focus on his son, Albus Severus Potter and his struggle with the family legacy. The play has been split into two parts due to its 'epic nature', both of which have been sold out for advance tickets.

The announcement comes during a spate of Potter-frenzy with the new film Fantastic Beasts and Where to Find Them, starring Eddie Redmayne, also being released this year. Next year will mark the 20th Anniversary of the first book and will see special editions of the books themed by the four Hogwarts houses. 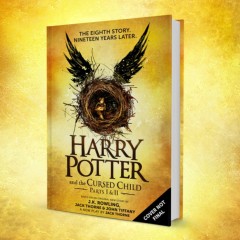 The eight book in the Harry Potter series will be released this summer, it has been announced on Pottermore, J.K Rowling's official site for the series.