Think standing on Lego hurts? Wait until you stand on Kylo Ren's lightsaber!

The number one Lego video game franchise returns, this time taking it's own unique and comedic interpretation of the most successful US Box Office film.

That's right, very soon you will get to experience all the excitement, drama, and plot repetition that was Star Wars VII: The Force Awakens, but in an adorable Lego format.

The announcement trailer shows that the game holds onto the family friendly, humorous style of presentation that the Lego games have become renowned for. I especially like the light flicking Stormtrooper.

Lego Star Wars: The Force Awakens will be available on all major gaming platforms, that means Nintendo 3DS, PlayStation 3, PlayStation 4, PlayStation Vita, Wii U, Windows PC, Xbox 360 and Xbox One.

The game also promises to bridge the gap between the events of Return of the Jedi and The Force Awakens. This will be handy for anyone who cares about the canon of Star Wars, rather than going into The Force Awakens blind. Looking at you, post-millennials!

However, as if the Sith themselves were some way involved in the game, get ready for some platform exclusive content, and the dreaded season pass. If you happen to have a PS3 or PS4, you will get exclusive downloadable content, although it has not been made clear what that content will be.

Similarly elusive is the details of the season pass, other than it is available to buy, and will release additional content AT SOME POINT. A Deluxe Edition of the game will come with the season pass, and an exclusive FN-2187 (Finn) Lego figure.

"We are delighted to return to the Star Wars Universe and continue the journey with the franchise that started it all for LEGO videogames," said Niels Jørgensen, Vice President, Digital Games for the LEGO Group. "LEGO Star Wars: The Force Awakens will offer an amazing gaming experience covering not only the movie but also exclusive content with all the fun and humor you would expect from a LEGO game, while delivering the epic Star Wars adventure fans expect.

Far be it from me to tell you what to do, but if you love Star Wars, this will almost certainly be a great addition to your life. However, let's hold off on buying the season pass - we have to show gaming publishers we won't tolerate this Jar-Jar level of irritation and contempt. 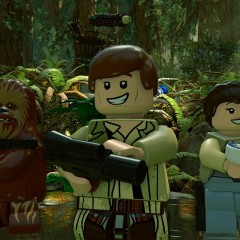 Think standing on Lego hurts? Wait until you stand on Kylo Ren's lightsaber!