On 2nd March Gaycation will begin on Viceland, with Ellen Page and Ian Daniel getting to know LGBT communities around the world.

Ellen Page and Ian Daniel will host the programme on Viceland, Vice's new TV network. In each episode, the two friends will focus on how different cultures experience issues related to gender and sexuality. Throughout filming they have met and got to know members of the LGBT communities in different parts of the world.

In a BuzzFeed interview, Page and Daniel explained that this experience was life-changing and very personal for both of them. Page understood how privileged her position is compared to the many other realities that she came to know when making the show. The Canadian actress described it as a very emotional process. Daniel remarked that the opportunity to have one-on-one interactions with various people was an incredible learning experience. The closeness established by those interactions was invaluable and he mentioned that it isn't something you have the possibility to access in real-life.

Several stories are shared by people belonging to different LGBT groups. One of the aims of the programme is to give a voice to communities who are often marginalised. Telling those stories raises the opportunity not only to give space to untold realities, but also to raise awareness of these situations for people from different backgrounds and nations. Page travelled to different countries for Gaycation, but she also recorded an episode in the U.S., her current home country. For her, it enabled a moment of reflection on her own reality, too.

Watch the promo trailer for Gaycation here, before the official start of the TV series in March: 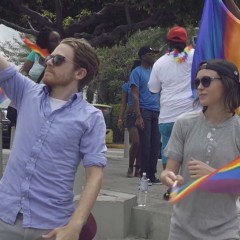 On 2nd March Gaycation will begin on Viceland, with Ellen Page and Ian Daniel getting to know LGBT communities around the world.