Another week has passed us by, all too quick for some, and not fast enough for others! With Halloween done, and now Bonfire night over with, there are no major British holiday left until Christmas. This means all we have to enjoy is the nation splitting itself apart over the age old argument of is it too early to put up Christmas decorations? By the way - it is.

I don't know about you but I'm seriously hitting November blues. The nights are drawing in, it's getting cold, and everything is quickly becoming routine. I know that many of you may be in the same boat, but remember, no matter how difficult you may be finding things, there is always hope. Find one thing in life you love, or look forward too, and hold onto it. And remember to talk to someone. In the immortal words of Harvey Dent, "The night is darkest just before the dawn."

The news we have selected this week is refreshingly light-hearted. I mean seriously, who ISN'T touched by the new Finding Dory trailer?!

I hope you have the most amazing of weekends. Do something you love, talk to someone you haven't heard from in a while, and eat lots of great food. Same time, same place next week!

The first trailer for Finding Dory has been released

The voice of Dory, Ellen Degeneres, released the trailer on her social media. The trailer revealed the plot of Finding Dory - the highly-anticipated follow-up to 2003's Finding Nemo. The release was quickly trending on social media like pretty much anything Ellen is involved in does. Alongside the trailer release came a first poster with the tagline: "She just kept swimming" and cast details with Allen Brooks and Willem Dafoe's roles being revived and introducing Idris Elba and Diane Keaton into the works. Alexander Gould - the original Nemo - has not been re-cast due to his now broken, adolescent voice and his replacement is still a secret. In the day and a half following the trailer's release on YouTube, it racked up 5.5 million views.

Coldplay's new single shows us yet another style re-vamp

Coldplay have released a new single, Adventure of a Lifetime. It is their first single since last year's album Ghost Stories did pretty bad business. Adventure looks to be sending Coldplay back to the style of their last successful album, 2011's Mylo Xyloto which saw them take a brand new, upbeat, and pop-rock-friendly approach to their music. They performed the song on Channel 4's TFI Friday hours before its release and hours after announcing their new album, A Head Full of Dreams, will be released on December 4. The album will see collaborations with Beyonce and Noel Gallagher. Interesting, eh?

Benedict Cumberbatch tops off another stellar year with a CBE

Benedict Cumberbatch has received his CBE for services to drama and charity. This year he starred in perhaps the world's most talked-about play, Hamlet during which time his opinions on the nature of the acting profession became clear. Upon leaving Buckingham Palace, he used his airtime to explain his intention to use his fame to 'the benefit of other people'. Cumberbatch used his titular role in Hamlet at the Barbican to ask audience members to recognise the plight of refugees from the Middle East and donate money to the charity, Save the Children.

Last weekend was Mozilla Festival, and it was without a doubt one of the coolest events I have been to. Mozfest, as it's affectionately known, is an annual coming together of likeminded people - of all ages - to work together to learn new technologies, share new ideas, and solve social issues through the application of open source technology. Arts Award attended to demonstrate the synonymy between art and technology, and young people even submitted Discover Arts Award portfolios over the weekend.

Google on a roll with new music app

Google have had a very productive month, with new hardware, new software, and a whole new service called YouTube Red. This week the company continued to demonstrate their serious new approach to media consumption with the release of a new app - YouTube Music. This is an app that takes the vast music library that is uploaded to YouTube, and refines it in an stripped back app, which is free to use with ads. Alternatively, if you pay for YouTube Red, you can switch between video and audio only modes, and save music offline. Again, this is US only at the moment but it genuinely is exciting to see Google finally take media consumption seriously. Perhaps they were spurred on by the introduction of Apple Music to Android this week...

The Government is having another go at delivering on the promise of connecting all houses with a decent internet connection. Under the Universal service obligation, UK citizens will have the right to demand at least 10Mb download speeds from their ISP, and have that delivered wherever they live in the country, by 2020. Internet is now considered a utility in the same way that water or electricity is, and demonstrates the growing cultural relevance, or indeed dependence, on internet connectivity.

Cast your mind back to earlier this year, when Jeremy Clarkson took umbrage to the lack of hot food available after filming so decided to punch his producer. Said producer got a split lip and drove himself to hospital, while Clarkson was effectively sacked before being picked up by Amazon. The victim of the assault did not to press charges at the time, but has allegedly decided to sue both the BBC and Jeremy Clarkson for racial discrimination. It is believed he is asking for £100,000.

Prepare you high pitch squeals of excitement (yes, you too boys!), because they have returned from the year 3000. Charlie Simpson has rejoined with Busted, and they are going on a reunion tour! The announcement was made on Tuesday of this week, with tickets going on sale yesterday. Having previously said "I have no interest whatsoever in rejoining Busted and I never will", fans will be excited to see Charlie going back on his word.

Interactive tour of the British Museum

London seems to be the cultural hub for everything, which is all well and good providing you are able to easily get there. For those who can't, you miss out on visits to institutions like the British Museum. Well now Google has made it possible to visit the British Museum from the comfort of your home. Using street view, you can take a virtual tour through the museum, and look at 4654 items digitally archived. I will warn you though, the virtual tour was a little bit janky, and it definitely doesn't like it when you move too fast!

See you next week! 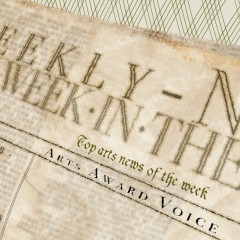