Open source enthusiasts congregate for weekend of sharing and hacking

Over 2,500 people filled out Ravensbourne this weekend to attend the annual Mozilla Festival, including an estimated 300 children

Affectionately called Mozfest, the festival is a hands-on experience that allows people to engage Participants from over 50 countries attended the hands-on festival.

Mozilla Festival is unique for its approach to conference events, encouraging and actively promoting a free-flowing attitude to congregation and ideation. Sessions are hosted almost entirely in open spaces,

Perhaps most interesting is their attitude towards children. 'Savvy micro humans' are treated with the same level of respect as adults, and they are welcome in any session.

Indeed, young people are even running the sessions. The youngest session leader was a nine-year-old by the name of Femi Owolade-Coombes. Even at such a young age, he already had the ethos of inclusivity and community embedded. Femi was kind enough to sit down for an interview with me.

Mozilla is dedicated to building and supporting an open web, and the communities which spring up as a result of welcoming and unfettered access. Apt, given Theresa May reintroduced the Draft Communications Data Bill, known as the Snooper Charter this week.

The Communication Data Bill was subject to multiple discussions over the festival. Raegan MacDonald, Senior EU Policy Manager for Mozilla, held a keynote where she outlined her concerns for the policy. She presented the case that "pervasive connected devices" have the potential to destroy our privacy, but it is not too late to walk back from the precipice.

"What kind of example does that set to the rest of the world" #mozfest pic.twitter.com/vdFAHX3lJ7
— Tom Inniss (@tominnissjourno) November 8, 2015

Arts Award was present during the festival, promoting the synonymy between art and technology. Arts Award allows young people to gain a nationally recognized qualification through their exploration and participation of the arts. During the weekend seven young people submitted a Discover portfolio for moderation, which is an introductory award.

"We had an amazing two days of young people approximately 300, plus parents, plus guardians, plus educators and the world in general that chose to rock up and make stuff together so that they can find their common ground between young and our adult populations." 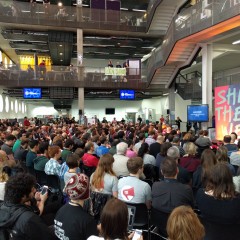 Open source enthusiasts congregate for weekend of sharing and hacking