SeaWorld, in the same week it welcomed a new baby manatee to its waters, has bowed to pressure and announced it will no longer accept stolen whales from the wild in its world famous parks.

The pressure that tipped them over the edge to make this change didn't come from the BAFTA winning, infamously controversial documentary about SeaWorld's inner workings, Blackfish. No, it came from a short rant by Harry Styles during a One Direction live performance.

Here are some facts:

- Previously, SeaWorld was waiting for the US government to approve an application to import 18 Beluga whales from the Russian Arctic to the park.

- Blackfish garnered a great deal of traction as one of the most successful documentaries in recent history and generating a huge amount of scepticism for SeaWorld emerging from how the film exposed the way they treated their animals.

- During a performance in San Diego in America, Harry Styles implored his fans to boycott the organisation for its treatment of its animals. Following this, Twitter exploded with 'Directioners' offering their opinions on SeaWorld based, most likely, purely on what they'd been told by Styles.

Along with the attention made off the back of Blackfish, this furore saw SeaWorld reverse their decision to pursue the sharks' acquisition. The National Oceanic and Atmosphere Administration, who is the body who denied Georgia Aquarium, from whom SeaWorld was to eventually acquire them, the sharks, released a statement on their website:

"SeaWorld has not collected a whale or dolphin from the wild in decades. To reaffirm that commitment, SeaWorld has informed the Georgia Aquarium that we will not accept any of the belugas listed on their NOAA Fisheries import permit application…"

Now, it slightly saddened me that a few words from an albeit influential pop star did what Blackfish and the monumental work that must've gone into making the film couldn't.

It says a lot about the state of the modern documentary. And while, if you've seen the film Blackfish and consequently know full well the extent of the accusations of maltreatment, the reason the decision was reversed is benign, it is, nevertheless, momentous and important.

Streaming services like Netflix and Amazon which perform based on a remit of universal entertainment for everywhere mean that documentaries are more popular than they have been for many years of inactivity. Netflix, in particular, is known for its rich collection of documentaries – both film and television. It boasts David Attenborough's and Louis Theroux's TV documentaries as well as Oscar winning documentary features. This includes Blackfish.

This type of move is what films like Blackfish aspire to engender and yet it couldn't. A sentiment by Styles did it. Documentaries help people think conscientiously and open-mindedly rather than, presumably, adopting a certain an opinion just because a singer you love said so.

So yes, Styles has done marine wildlife a justice and this is admirable, however it does not justify the mentality "it doesn't matter who made the change happen, it happened, so shut up". Documentaries offer far more than superficial persuasion; they offer learned alternative perspectives. They deserve to be taken seriously. No doubt, indeed, that Styles had seen Blackfish, too. Therefore, some solace can be found in considering that Blackfish brought about this change indirectly. Though his fandom who carries the weight of the action can't be considered to be as learned. 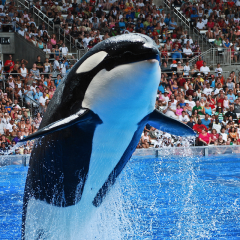 The Scourge of SeaWorld: how Harry Styles did what Blackfish couldn’t

SeaWorld, in the same week it welcomed a new baby manatee to its waters, has bowed to pressure and announced it will no longer accept stolen whales from the wild in its world famous parks.