Prepare your wallets - the annual Apple iPhone event has arrived, with iPads, iPhones and set-top boxes to tantalise and tempt you.

The annual iPhone event happened yesterday, but it was far from a phone exclusive affair. Apple announced a few new devices, gave details on impending OS updates, and continued to push new accessories for existing devices. Tim Cook, Apple CEO, said there were monster announcements to be made, so they had to dive straight into the presentation. Well, it required a monster article to cover everything discussed, so I'm going to stop preambling and go straight into the summary.

Left until last at the conference, Apple proudly announced that "the only thing that's changed is everything" - except for the look of the phone, the price, and the ludicrous, inexcusably stingy 16GB starting storage.

However, Apple have made some changes to the iPhone duo. Both now have a new colour option, Rose Gold, and are built from a new aluminium alloy. The screens are made from Ion-X glass, which is the same as that of the Apple Watch Sport. Both have new A9 chips, which are 70% faster, with a 90% improvement in graphics.

The cameras have been updated, sporting a new 12megapixel rear iSight camera, which can film 4K video, while the front facing camera is now 5 megapixels, and supported by 'Retina Flash'. This is Apple speak for using the screen as the front-facing flash, and it is apparently 3x brighter than regular flash. These cameras will now take 'Live Photos' - before and after the shutter closes, a second and a half of video will be captured, allowing for moving images. This is a blatant copy of HTC's Zoe feature, although Apple will support the moving images on all of their devices, and will allow you to post them to Facebook.

The iPhones will also now support Force Touch, although thankfully it has been renamed to 3D Touch. This was first introduced in the Apple Watch, and allows the devices to differentiate between different levels of pressure applied to the screen. With it comes two new gestures for users to learn - the 'peek' and the 'pop'. Peek is like Quick Look for Mac, where you can quickly preview information, while pop will open up the information. In some ways, this new contextual form of interaction is most akin to a right-click on a computer, presenting you with new ways to engage with apps and information.

For me, the most exciting announcement at this event was the new iPad Pro. Given that I, for the longest time, had no interest in the iPad, when I finally got one I came to realise how great it was as a consumption device.

The new iPad Pro is a whopping 12.9 inches diagonally, with an A9X memory chip which is 1.8x faster than the processor found in the iPad Air 2. Apple claim it is is faster than 80% of the laptops that shipped in the last 6 months. It has 5.6 million pixels, which is more than a 15-inch Macbook Pro with Retina. It has a 10 hour battery life, 4 speakers and is also accompanied by a new Keyboard, and the new Apple Pencil - which is just a digital stylus.

It is obvious that Apple are really pushing this device more as a tool of productivity, rather than consumption, as demonstrated by their on stage demonstrations by Microsoft (yes really!) and Adobe. The latter has caused a small outcry on the internet, for using Photoshop to edit a smile onto a model's face.

It will be available in November in silver, gold and space grey. UK prices have yet to be announced, but in the US, prices start at $799. Remember that you can't just do a straight conversion from dollars to £, because of additional expenses such as VAT.

Apple Watch gets a style upgrade

Let's be honest, the Apple Watch is a style product. That much was evident through the way in which it was marketed to fashion icons and through fashion magazines, let alone the decision to release a 18-carat gold version, which can cost as much as £9,500.

This theme continues with the latest roster of updates. There are new watch colours available, with Gold and Rose Gold versions of the Watch Sport now available to buy. Luxury brand Hermès will be releasing three custom leather straps,including a double-wrapped one. There are also new pastel-coloured bands for the Watch Sport, and a special (Product) Red version for Bono's AID's charity.

They did show off some cool new use cases for the watch, including use in the medical industry, where doctors can remotely monitor the heart rate of women and their unborn foetus. However, none of that will be usable until the watch gets a major OS update. To that end…

Apple will soon be releasing iOS 9, El Capitan and Watch OS 2. None of this is new information, as it was all announced at WWDC back in July, but there is finally a shipping date. I have previously covered the big changes introduced with the software on Voice. Check out the article for a more detailed overlook.

Watch OS 2 will launch on September 16th, bringing with it native apps, which will make the Apple Watch much more useful, and substantially improve the current roster of apps available.

Also coming September 16th is iOS 9. The operating system, which runs on iPhones and iPad focus on making devices faster, smarter, and generally more useful. There are compression techniques to reduce the size of app and OS updates which will be useful given that iPhones still start at 16GB. Siri is more deeply integrated in the OS, and it will now be possible to run apps side-by-side on iPads. There is also a new power saving mode which will squeeze another 3 hours out of a single charge.

Mac users will have a little bit longer to wait to get new software. El Capitan, with its refinements and task management improvements will be shipping on September 30th, as a free update.

Often cast aside as a "hobby" category, it has been rumoured for years that Apple were working on a TV product that would revolutionise the industry, combat the stagnant development of television, and solve all of our living room woes. Well, the new Apple TV was announced yesterday and… it's not really a game changer.

The box now runs a new OS, called tvOS - which means Apple now has 4 different operating systems. It shares a lot of the core code as iOS, so in theory should be updated quickly. Apple believe the future of television is apps, and by building upon iOS, they are making it easy for developers to create apps for the set-top box.

The user interface (UI) is very similar to old versions of Apple TV, just with a white background and a slightly less claustrophobic feel. It has some clever and thoughtful features. For example, when watching something, you could ask 'what did he say', and Siri will rewind the last 15 seconds and put the subtitles on.

The new remote has a glass trackpad, and 6 buttons. One of these buttons activates Siri, who is now integrated into the device and ready to use natural language searching to find you content you want to watch. You can scrub forwards and backwards using the touch remote, which also supports motion control

It will also do gaming - Guitar Hero and Disney Infinity are coming to the device, both of which were previously console exclusive. It will also support any MFi controller, which you may want to invest in, as that remote looks mighty small!

The box looks identical to old Apple TV's, but a little bit taller. It has CEC, meaning it can take control of your television and turn it on (providing your TV supports it), but also has an IR blaster, so it can change the volume on older TV's.

It is due to launch in October of this year, but again, no word on UK pricing.

Photo courtesy of The Guardian 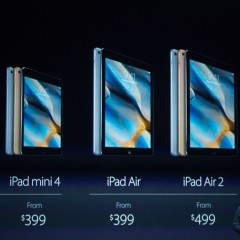 Prepare your wallets - the annual Apple iPhone event has arrived, with iPads, iPhones and set-top boxes to tantalise and tempt you.