Monday was the close of the Edinburgh Festival Fringe 2015, and it proved to be bigger than ever!

There were 50,459 performances of 3,314 shows across the month of August, in 131 venues throughout the Scottish capital. 2015 actually saw the introduction of fourteen new venues, including Underbelly's Circus Hub, and SpaceUK's new three floored venue called SpaceTriplex, which was located in the Prince Philip Building on Hill Place.

It was announced by the Edinburgh Festival Fringe Society that an estimated 2,298,090 tickets were issued, which is a 5.24% increase on the previous year.

"Once again artists and audiences have travelled from across the globe to be a part of this unique cultural event. And with an estimated 2,298,090 tickets issued and many thousands of people attending the 800 free shows in the programme, I've no doubt every single person who watched a Fringe show, or experienced this wonderful festival city, will take away unforgettable memories.

"With incredible talent from 49 countries from all over the world taking part this year, the Fringe has once again demonstrated itself to be both truly international and profoundly Scottish. The 2015 season has firmly cemented Edinburgh's reputation as the world's leading festival city. "

The scheme made the Fringe accessible to young people whose circumstances would not normally allow them to participate in cultural activity.

This is just one of a series of initiatives over the years to come to tackle the physical, economic, social and geographic barriers that prevent people from participating.

For the first time in the Royal Mail's 500 year history, a commemorative stamp was created for a festival, and you guessed it - it was for Edinburgh Festival Fringe.

The special postmarks were being applied to stamped UK mail from 7-31 August. These rare postmarks are saved for special occasions and are used to recognise significant events, historical anniversaries or support of charity. It was the first time in the Royal Mail's 500 year history that a festival has been featured on a postmark. 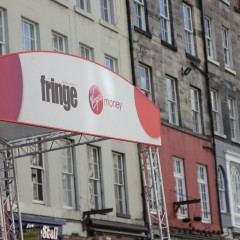 Monday was the close of the Edinburgh Festival Fringe 2015, and it proved to be bigger than ever!