Thanks for having us Edinburgh, it was emotional.

Once more we have returned from an exciting but gruelling capital of Scotland, which every August is transformed into the home of the largest arts festival in the world.

The team worked tirelessly to deliver our Edinburgh coverage. At time of publication we have 129 reviews on the website, with more still being written. This absolutely smashes our numbers for last year, which were in the 70's. These team worked tirelessly (technically, they worked very tiredly) to bring the best coverage possible, and it was a pleasure to work with them.

However, in all the rush and excitement that the Fringe brings, I failed to properly introduce the team of intrepid reporters who accompanied me. Allow me to rectify that now.

My name is Tom, a Politics graduate, and currently undertaking a Masters in Journalism. I'm deputy-editor of Voice, and project lead for our Edinburgh coverage. I have an almost unhealthy obsession with Batman. I love gaming, playing guitar, and reading graphic novels - I'm currently enjoying Bill Willingham's Fables.

My profile is available to view here

Bhavesh recently finished a degree in Film and Television Production…so it's probably quite clear he loves films and TV. His writing on Voice is generally geared towards film and TV but you'll also read reviews and blogs from him about all sorts. Other than film and TV he reckons he 'can' enjoy most art, but he does love a bit of comedy in particular! He is also our associate editor.

His profile can be viewed here

Josh is the website administrator for Arts Award Voice. Actively throwing himself into as many arts forms as he can, he very often ends up on stage. He loves acting, is great at singing, and enjoys watching and reviewing theatre.

Josh's profile can be viewed here

Sally is our lovely Community Coordinator. Having studied a mixture of creative and academic subjects at A-level, she is now off to study Media and Communications at Goldsmiths. Her interests revolve around creativity, in particular conceptual textile design and Disney films!

Jo a full time student with a passion for theatre, so when not at university she's usually working with her local amateur dramatic group, building and painting set and crewing on productions. Jo's have just achieved her Gold Arts Award and is starting at RADA in September to study Technical Theatre and Stage Management.

Read more of Jo's work on her profile

More of Idriss' work can be found on his profile

Emrys is the project manager for the Arts Award Youth Network & Arts Award Voice. He writes occasionally, but spends most of his time leading & supporting the amazing editorial team that bring you this site.

Pick of the Fringe

An award we started last year, we found it tougher than ever this time around to choose winners. The calibre of talent was exceptional, and we saw so many shows, narrowing it down felt like an impossible task. However, we persevered, and the list is now available to view online. A huge congratulations to everyone who made it onto the list.

As I said, we viewed over 130 shows, many of which were absolutely fantastic. To read all of these reviews mosey on over to the 2015 Edinburgh Fringe Voicebox. This is where we have packaged everything up for easy access in the future.

Finally, I wrote a blog discussing why we bother to review, and why we value young reviewers. This is in response to an argument I see come up repeatedly, discussing, indeed criticising, the work produced by young people, and suggesting they aren't as valid as their elders. I welcome discussion on the subject! 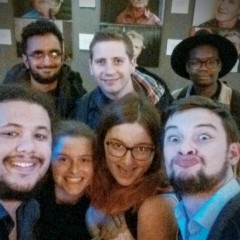 Thanks for having us Edinburgh, it was emotional.